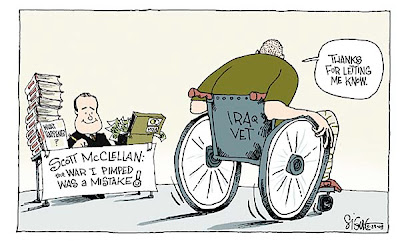 It's somewhat sad to see what is happening to Scottie McClellan. Even when he was spinning like an Iranian uranium-enrichment centrifuge, I always felt a strange kind of sympathy for Scottie. Now I know why. I recognized a sliver of humanity in him that is lacking in all other Bushite sycophants. McClellan has come (oh, I don't know . . . ) 60% clean in his new tell-part book and the White House and their apologists are calling him "Benedict Arnold," "a traitor," "a turncoat," a "Hamas apologist" (???), and "probably the worst White House press secretary in recent memory."

Maybe McClellan and Bill Richardson can start a club. They can call it The Judas Club. It will be for anyone that served in an administration and later lived to regret it. McClellan's got it really bad (except for his anticipated book sales) because even the left is piling on. Why did he go out there day after day after day and spin like a break dancer for an administration that he knew didn't know how to govern or how to tell the truth? Isn't it too late for Scottie to come to Jesus?

Excuse me if I'm resentful of the attention Scott McClellan, George W. Bush's onetime presidential press secretary, is receiving for finally telling the obvious truth that the Bush White House deceived the public about the Iraq war. Though McClellan's account has punch coming from an insider, he's late to the party. Some of us made the case when it counted--back in 2002 and 2003, before the war was launched, and in the following years--and we also maintained that the deceptive measures of the Bush administration extended beyond its PR campaign for war in Iraq. Yet back then McClellan was doing what he could to thwart such efforts. Now he says the media failed to confront the Bush administration forcefully enough. Which is true. But when reporters did try, McClellan put up a stonewall. So his complaint is like that of a thief who, after pulling off a caper, gripes that the incompetent police did not nab him. This is absurd. After all, before each press briefing, did McClellan go to the men's room and use a bar of soap to write on the mirror, "Stop me before I spin again"?

According to interviews with Republicans in their home states, Kansas Gov. Kathleen Sebelius, Arizona Gov. Janet Napolitano and Missouri Sen. Claire McCaskill differ from by two important measures: They've managed to win elections without developing polarizing personas, and they've shied away from emphasizing gender in their campaigns.

Barack Obama might be well advised to curb his occasional impulse for telling tall tales, lest the Republicans seize the opportunity to paint him as Pinocchio.

Barr doesn't actually need to spoil , to use the state. He merely needs to force McCain to fight for the state. That, as much as , was the effect of the 2000 Nader run. In the waning days of the race, Al Gore had to waste time campaigning in states he should have locked up long before, like and , because Nader was polling close to 10 percent in them. (Nader eventually broke 5 percent in both states.) Meanwhile, George W. Bush was able to expand the map and dither with an 11th hour campaign jaunt.

McCain will have less money to spend than Obama, and 's an expensive state. The last competitive statewide race, the 2002 Senate battle between Saxby Chambliss and Max Cleland, cost a total of $18 million. That's as much as McCain raised in the month of April. Unless Barr really takes off and starts scoring Perot-like numbers, that's the risk for McCain right now: Wasted resources and wasted time, while Obama is free to plunge into , , , etc.

It's about time somebody slammed Howard Kurtz for his multiple conflicts of interest. His interview with CBS correspondent Kimberly Dozier when his wife is the publicist for her book is one thing (he disclosed this at the tail end of the glowing profile). But here's the guy who is supposed to be the nation's foremost media critic, yet he's employed by the Washington Post and CNN/Time-Warner, two of the nation's largest media companies. Not to mention that practically everything he promotes as a major media ethics story has the uncanny knack of bubbling up through some right-wing blog site. He's been a hack for some time and the Dozier interview is the least of the transgressions.

There are days that I really hate politics – days when my cynicism and contempt for the politicians, the process, the whole bloody, unholy mess of spin meisters, pundits, press, bloggers, and commentators from all sides of the ideological spectrum make me want to chuck it all and write about sports, or gardening, or cats.