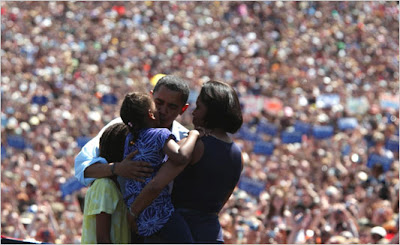 Riding the first wave of the inevitable post-mortems about what went wrong for Hillary Clinton is an important question: To what extent did sexism play a role in her extraordinary crash and burn?

That begs another question without which the first cannot be addressed: To what extent did racism impede Barack Obama's nevertheless triumphant march from obscurity to the verge of nomination?

The answers are that these twin isms certainly played significant roles in deflecting support from each candidate. After all, we're talking here, y'all. But certainly the Sour Grapes Squad at campaign HQ is not suggesting that over the long primary season there were more people turned off by the specter of a president in a pantsuit than an African-American in a three-piece suit.

That noted, some Clintonistas are deeply in denial about the overriding reason that Obama will be the first to cross the finish line, probably as early as tonight after and vote:

Obama has earned the nomination by getting more voter and more delegates without having to resort to appeals to break mutually agreed upon party rules like Clinton has. He also has run a much better campaign, and everything flows from that.

Here is some of that everything:

* Obama organized his campaign from the bottom up and with an eye on the long haul to November and the White House. organized her campaign from the top down with little thought to post-Super Tuesday concerns because it was assumed that she would have the nomination in the bag after the early primaries.

* Bill Clinton. The most adept stump politician of our time became a huge liability because of his tone-deaf determination to keep going negative.

* Obama was a quicker learner. Despite a series of missteps and crises that would have sent a lesser candidate packing, some of them self inflicted like his association with the Reverend Wright, he has been far more adept than Clinton in turning political developments to his advantage.

* Clinton thought that by not conceding she could continue to campaign with however thin a veneer of credibility, but Obama has deftly one upped her by refusing to declare victory until she admits defeat.

To complete the circle, Clinton squandered an opportunity to hammer home her gender as an asset and instead used it as a crutch.

Using gender as a power point would have been somewhat risky, but for all of Clinton's talk of leadership -- and strong leaders are willing to take risks -- the only risk she took was embracing the mud slinging that stopped what little momentum she had after she "found her voice" in New Hampshire.

Clinton campaigned before audiences dotted with "Iron My Shirt" signs, but never used these misogynists to talk about what made her run so personal and so historic. She declined media requests to go deep on arguably her most compelling story line, while she ham handedly used gender to try to evoke pity and to whine. This included tears-on-cue photo ops early in the primary season that deservedly provoked more ridicule than sympathy.

Finally, it never seemed like Clinton knew who she was. And surprisingly that sometimes seemed like it included being a woman.

Photograph by Greg Wahl-Stevens/The Associated Press
Posted by Shaun Mullen at 1:34 AM
Email ThisBlogThis!Share to TwitterShare to FacebookShare to Pinterest

Hillary campaigns in front of "Iron My Shirt" tee shirts.
Bush threw out citizens from his appearances who sniffed of dissent.
More reason to change and take back America.