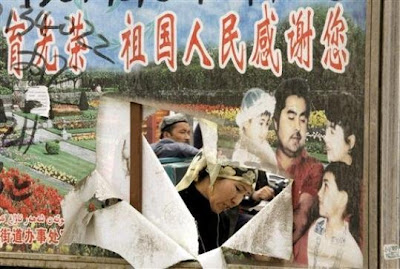 Uighur man and woman seen through torn Chinese propaganda poster
Just when you think that the behavior of the Bush Torture Regime couldn't be more despicable comes another blockbuster: The Justice (sic) Department not only gave those nasty Chinese commies access to indigenous Chinese being held at the branch of the Rumsfeld Gulag, but "softened them up" for the regime or allowed its own thugs to torture them.

"Buried in a Department of Justice report released Tuesday are new allegations about a 2002 arrangement between the and , which allowed Chinese intelligence to visit Guantánamo and interrogate Chinese Uighurs held there.

According to the report by Justice Department Inspector General Glenn Fine, an FBI agent reported a detainee belonging to China's ethnic Uighur minority and a Uighur translator told him Uighur detainees were kept awake for long periods, deprived of food and forced to endure cold for hours on end, just prior to questioning by Chinese interrogators.

Susan Manning, a lawyer who represents several Uighurs still held at Guantánamo, said Tuesday the allegations are all too familiar.

personnel 'are engaging in abusive tactics on behalf of the Chinese,' she said Tuesday. When Uighur detainees refused to talk to Chinese interrogators in 2002, military personnel put them in solitary confinement as punishment, she said.

Yes, once upon a time we were better, but that was before a willfully duplicitous man by the name of George Bush who piously condemns the Chinese crackdown on Tibet and other travesties while allowing its agents free reign to torture -- or have tortured for them -- their perceived enemies on U.S. soil.

The Uighurs ended up in Gitmo after being rounded up in sweeps after the post-9/11 invasion of Afghanistan along with alleged terrorists from many other countries. It is probable that they were "sold" to gullible U.S. intelligence agents for bounties by Afghan warlords and may not have been terrorists at all.

Uighurs are from an area of Xinjiang Province that they East Turkestan. Although formally "autonomous," the province takes its orders from Beijing and has been the pattern elsewhere in the wild west of China, some 6 million Han Chinese immigrants have reduced the Turkic Muslim Uighurs to only about half of the population.


THE F.B.I. CO-OPTS ITSELF, CLOSES WAR-CRIMES FILE
As the full extent of the use of torture has emerged in recent months, it is obvious that many officials and law-enforcement officers were alarmed by what they saw, but were rebuffed by their superiors or simply looked the other way.

There was deep concern at the FBI, but it allowed its own hands to be tied.

Testifying before the House Judiciary Committee last month, FBI Director Robert Mueller made it clear what agency’s reaction to the CIA's use of waterboarding and other forms of torture in 2002 had been: To keep its own agents out of trouble but not blow the whistle.

But when House Democrats pressed as to why the FBI hadn't investigated the abuses, Mueller said his hands were tied because the CIA and the Defense Department had the green light.

"There has to be a legal basis for us to investigate, and generally that legal basis is given to us by the Department of Justice," but that wasn't going to happen with torture champions like John Yoo and others in the Justice Department's Office of Legal Counsel riding herd.

Meanwhile, as evidence of prisoner mistreatment at Guantánamo began to mount in 2002, FBI agents at the base created a "war crimes file" to document accusations against American military personnel, but were eventually ordered to close the file down, according to the report that documented the mistreatment of the Chinese Uighurs.

The 437-page review prepared by the Justice Department inspector-general provides the fullest account to date of internal dissent and confusion within the Bush Administration over the use of harsh interrogation tactics.

Officials at senior levels at the FBI, the Justice Department, the Defense Department and the National Security Council were all made aware of the complaints of FBI agents, but little was done.

The report quotes passionate objections from FBI officials who grew increasingly concerned about practices like intimidating inmates with snarling dogs, parading them in the nude before female soldiers, or "short-shackling" them to the floor for hours in extreme heat or cold.

"Beyond any doubt, what they are doing (and I don't know the extent of it) would be unlawful were these enemy prisoners of war," but another official ordered the "war crimes file" closed because "investigating detainee allegations of abuse was not the FBI's mission."

Photograph by Eugene Hoshiko/The Associated Press
Posted by Shaun Mullen at 1:28 AM
Email ThisBlogThis!Share to TwitterShare to FacebookShare to Pinterest

Hello! I am a Tibet supporter from Japan.
Please read this letter written by Dr. Robert Thurman that
includes a great idea to make " Dialogue between the
Dalai Lama and Hu Jintao" happen at the G8 Summit
this July in Japan. Sign this letter and send it to your
country's leader immediately! Let's make this happen!