Solicitor General Clement: Don't Let The Door Hit You In The Ass On The Way Out 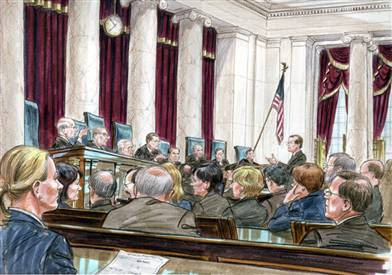 CLEMENT ARGUES BEFORE THE SUPREME COURT
Being solicitor general of the U.S. -- in other words its chief lawyer -- is a prestigious but thankless job. One would presume mostly thankless for Paul Clement, who has had to argue on behalf of a presidential administration that has determinedly ignored the rule of law and postulated some extraordinarily dangerous and inane legal policies.

There are many special moments in Clement's pleadings before the Supreme Court, but my hands-down favorite is his appearance in March 2006 to argue on behalf of the administration in Hamdan v. Rumsfeld.

Salim Hamdan, Osama bin Laden's bodyguard, was captured by forces in and hustled off to the Navy brig at . At issue then -- and still very much at issue now -- is whether the military tribunals created to try him and other terrorists are constitutional because the law passed by Congress authorizing them pretty much suspended all civil liberties, including habeas corpus. That is a writ issued by a judge ordering that a prisoner be brought before the court so it can be determined whether he is being imprisoned lawfully.

Habeas corpus is not some bleeding-heart concept. It is one of the pillars on which the American criminal justice stands and has served the nation well in times of war and peace for over 200 years. This means that habeas corpus is anathema to the Bush administration.

This was on full view as Clement, double-spoke his way through an oral argument to the effect that Congress didn't really mean to suspend habeas corpus but had merely "stumbled on" its suspension of the Writ. Clement said that this was okey-dokey because the president can do pretty much whatever he wants to do anyway as commander in chief in time of war.

"The suspension of the Writ [is the most] stupendously significant act [Congress can undertake]. "Are you really saying Congress may validly suspend it inadvertently?"

Souter would appear to have Clement in a box, adding:

"If you accept that the military commissions [tribunals] apply the laws of war, don't you have to accept the Geneva Conventions?"

"They can adjudicate that the Geneva Conventions doesn't apply."

"You can't have it both ways. The government can't say the president is operating under the laws of war, as recognized by Congress, and then for purposes of defining those laws, say the Geneva Conventions don't apply."

Clement then went deeper into the administration's world of smoke and mirrors.

He declared that the tribunals hew to the laws of war, so if a detainee has a claim like Hamdan's, he should bring it before a tribunal. But Clement was at his weakest -- and most obtuse -- when defending his claim that Gitmo detainees like Hamdan are different from regular POWs covered by the convention because . . . well, because they just are.

"If a group is going to try some people, do you first have the trial and then challenge the legitimacy of the tribunal?"

"This isn't just some group of people. This is the president invoking his authority to try terrorists."

Justice John Paul Stevens, saying out loud what must have been on the minds of all of the justices, pondered whether Congress had stripped the Supreme Court of jurisdiction to rule on Hamdam's habeas corpus claims:

And so it went.
The top court, with Chief Justice Roberts abstaining, later rejected Clement's legal flapdoodle and ruled 5-3 in Hamdan's favor, in retrospect but a temporary setback for the White House, which with the dutiful approval of Congress put a new law on the books pretty much identical to the old law.

Illustration by Art Lien/NBC News
Posted by Shaun Mullen at 1:33 AM
Email ThisBlogThis!Share to TwitterShare to FacebookShare to Pinterest