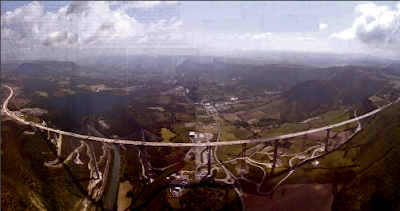 The Republicans seem at present, to be burning bridges between themselves regarding Senator McCain's candidacy, while the Democrats seem to be beginning at least to talk about building bridges.

But to build a bridge isn't enough. Leaders can destroy their own groups by not having enough genuine earthy experience on the ground, by not being able to bring bold but effective solutions to longstanding problems, and by failing to have an accurate ariel view of the "big picture." A leader needs all. In some semblance of balance.

Maybe that's why the word "bridge" has at least three meanings, all of them visionary:

A bridge: A structure that gives passage through or over that which was impossible or treacherous to pass over or through before.

The bridge: The elevated platform on a ship from which the captain surveys the entire waters and weather ahead and directs which way best to go.

The atheism debate is a textbook example of how a scientific revolution can change public culture. Just as The Origin of Species reshaped social thinking, just as Einstein’s theory of relativity affected art, so the revolution in neuroscience is having an effect on how people see the world.

Over the past several years, the momentum has shifted away from hard-core materialism. The brain seems less like a cold machine. It does not operate like a computer. Instead, meaning, belief and consciousness seem to emerge mysteriously from idiosyncratic networks of neural firings. Those squishy things called emotions play a gigantic role in all forms of thinking. Love is vital to brain development.

Researchers now spend a lot of time trying to understand universal moral intuitions. Genes are not merely selfish, it appears. Instead, people seem to have deep instincts for fairness, empathy and attachment.

Analogies can be helpful, but only in so far as they are honest and accurate. Neither of those terms applies to much we hear from the "Warpresident" and his latest jive from insisting that Barak Obama and other Democrats would endanger and perhaps the world by actually engaging Ahmadenejad and other bogeymen in a conversation. "rewarding bad behavior" is the typical administration phrasing, as though trigger happy is the world's school teacher, but either way, it's an opinion much related to past failures and with little success to its credit.

It's the sort of thing he hopes will buy into, since he would love to have them pressure American Jews into supporting Republicans. In my opinion, that's bad behavior; the kind dishonesty and cowardice usually produces and I would hate to see the losers, crooks, cowards and failures we flatter by calling Neocons, rewarded for it.

During the trial, which was held in yesterday and today, Ponce de Leon High School's principal David Davis admitted under oath that he had banned students from wearing any clothing or symbols supporting equal rights for gay people. also testified that he believed rainbows were "sexually suggestive" and would make students unable to study because they'd be picturing gay sex acts in their mind. The principal went on to admit that while censoring rainbows and gay pride messages he allowed students to wear other symbols many find controversial, such as the Confederate flag.

I picked up a book about quantum physics and super-string theory I have been meaning to read for ages, for a column I'm thinking of writing. It had been hanging over me, daring me to read it. Five hours later, I realised I had hit the last page. I looked up. It was getting dark outside. I was hungry. I hadn't noticed anything, except the words I was reading, and they came in cool, clear passages; I didn't stop or stumble once.

Perplexed, I got up, made a sandwich — and I was overcome with the urge to write an article that had been kicking around my subconscious for months. It rushed out of me in a few hours, and it was better than usual. . . . The next morning I woke up and felt immediately alert. Normally it takes a coffee and an hour to kick-start my brain; today I'm ready to go from the second I rise. And so it continues like this, for five days: I inhale books and exhale articles effortlessly. My friends all say I seem more contemplative, less rushed — which is odd, because I'm doing more than normal. One sixty-something journalist friend says she remembers taking Benzadrine in the sixties to get through marathon articles, but she'd collapse after four or five says and need a long, long sleep. I don't feel like that. I keep waiting for an exhausted crash, and it doesn't seem to come.