Taking Back America From The Torture Regime: And Now The Hard Part Begins 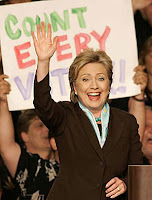 OBAMA AND CLINTON AFTER THEIR LATEST WINS. MORE HERE.


There are a lot of bruised egos and hurt feelings abroad in the land today among Hillary Clinton supporters now that the primary race is technically if not literally over, so I acknowledge that I'm a bit premature on this: But it is time for any and all of us for whom the disastrous George Bush presidency cannot end soon enough to unite behind Barack Obama.

I know that it will take a while for those bruises to heal and those feelings to subside. I also know that the crazy talk among some sycophants that they would rather support John McCain than Mr. Sweetie Man will abate, as will vapid allegations that Obama is sexist, which one conservative commentator correctly calls "weak tea" and notes is a convenient way to shift the blame for Clinton's many self-inflicted wounds.

What's more, I know that most Democrats will march arm in arm from the convention onto the most important electoral battlefield in generations, and that is what really matters.

* * * * *
It is all a bit amazing and not a little scary. I speak, of course, of Obama being the putative Democratic nominee and the man who will be saddled with leading the charge to take back America.

Way back in November, in a post titled Is Barack Obama the New Gene McCarthy? I compared the late great senator's improbable 1968 run for the Democratic nomination to what six months ago appeared to be Obama's equally improbable quest.

I concluded by saying:

So will Barack Obama do any better than Eugene McCarthy did? My instincts tell me that the answer is a resounding "no."

What happened in the intervening six months?

Nevertheless, I predict that Clinton will turn out to be a gracious loser, and by one account may have stayed in the race because it will be easier to bring her supporters over to Obama if they believe she was able to finish the race on her own terms.

We can only hope.

And so the political steel cage match of the young millennium is over bar the shouting. Clinton will play out the string until the last primaries on June 3 while Obama will refuse to declare victory until she finally concedes defeat. A smart move.

As a voter, I could not be happier. As a blogger, I'm ecstatic because I finally can turn my attention to the concerns that I have about Obama and what it will take to send John McCain into retirement.

Those concerns do not include Michelle Obama's leftie past, their flame-throwing former minister, bowling scores and other irrelevancies.

We'll leave the cheap shots and trivializing to the right-of center hyenas like Gerard Vanderleun, who takes the cake for wasting his considerable skills on nonstop and mean-spirited drivel over at American Digest, and event smart guys like Ed Morrissey and the other anteaters at blogs like Hot Air who expend extraordinary energy day in and day out vacuuming up Obama minutiae while determinedly ignoring the big picture.

One of the most positive developments of the long primary season was that voters looked a Trojan horse known as the summer gas tax holiday in the mouth and told Clinton and McCain that they weren't the suckers these candidates played them for.

That gives me hope that voters will be less moved by race baiting, flogging the flag and other hackery than the job at hand. That job is how Barack Obama can begin to take back America.

This will entail simultaneously trying to undo the myriad horrors and injustices of the Bush Era, including the Orwellian embrace of torture, abrogation of civil liberties and a never ending war while addressing gargantuan issues like an economic policy that is suffocating the middle class, the absence of a viable long-term national energy policy and . . . yes, finally forcing reforms in the insurance, pharmaceutical and health-care industries without which the epidemic of the uninsured and underinsured cannot be stanched.

McCain, of course, has neither the desire nor the ability to undo or do any of these things, while even a Democratic-controlled Senate and House will find it difficult to wean itself from the crack cocaine of politics -- the aforementioned corrosive big money -- that is the greatest obstacle to real change and a genie that I'm not sure that Obama or any other reformer can get back in the bottle.