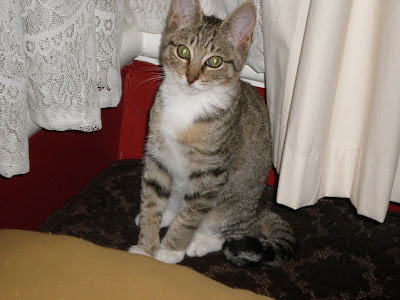 There is a new kitty in the life of my cousin Country Bumpkin and his wife. Here's the deal as he tells it:

"We decided a couple of weeks ago that we had mourned long enough for Tiger and Lily, the two cats whose lives ended 18 months or so ago, after they fell ill. So we went down to the SPCA and after losing one stunning kitten for the sake of thinking too long, we found a tabby and white, 3-month old male called Flash. And what a feisty, smart, energetic and attractive fellow he is! Flash is rather a good name for him, because he can run like the wind, but we decided to call him Louis, in honour of the late, great jazz trumpeter.

"What a guy! He still has to work out a modus vivendi with the cat next door, who is creeping around here trying to murder him for taking over what she thought was her territory. She's big, aggressive and smart too, so we're keeping Louis under wraps until he's big enough and then he can go outside and beat her up as she deserves."

Excellent! Now, as a gift for the new kitty, I’d like to tell you that my hilariously funny book, The World Is Your Litter Box, is in bookstores now and is also available on Amazon. The book is cleverly disguised as a cute cat book so humans will buy it, but is, in fact, a how-to manual FOR cats. Check it out on my website, www.theworldisyourlitterbox.com