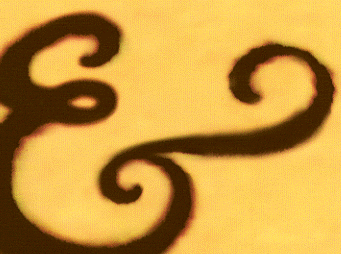 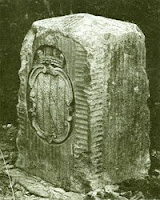 So, one day, into Delaware's great Basin/With strange Machinery sail Mr. Mason/And Mr. Dixon, by the Falmouth Packet/Connect, as with some invis'ble Bracket/Sharing a Fate, directed by the Stars/To mark the Earth with geometrick Scars.

Mason & Dixon is the penultimate book in my long slog to read the complete works of Thomas Pynchon (only his Vineland awaits) and is of more than usual interest because your Faithful Reviewer plies his trade within a stone's throw of the marker to the right, one of several placed by the eponomymous pair of 18th century surveyors in determining the demarcation line between Pennsylvania, Maryland, Delaware and West Virginia, and although they could not have known it, what would become the symbolic cultural boundary between the North and South nearly a century later during the bloody War Between the States.

Like Pynchon's 2007 magnum opus, Against the Day (reviewed here), Mason & is complex, wonderfully subversive and laugh-out-loud funny. But also like that book, it is more accessible than his earlier works, notably Gravity's Rainbow, a masterpiece but with prose so dense that you can stand a fork in them.

I knew I was in for a treat from the moment I read the Pynchonic run-on opening sentence of Mason & Dixon:

"Snow-Balls have flown their Arcs, starr'd the Sides of Outbuildings, as of Cousins, carried Hats away into the brisk Wind off Delaware,-the Sleds are brought in and their Runners carefully dried and greased, shoes deposited in the back Hall, a stocking'd-foot Descent made upon the great Kitchen, in a purposeful Dither since Morning, punctuated by the ringing Lids of various Boilers and Stewing-Pots, fragrant with Pie-Spices, peel'd Fruits, Suet, heated Sugar,-the Children, having all upon the Fly, among rhythmic slaps of Batter and Spoon, coax'd and stolen what they might, proceed, as upon each afternoon all this snowy Advent, to a comfortable Room at the rear of the House, years since given over to their carefree Assaults."

Pynchon casts Charles Mason, who actually was an astronomer by trade, and surveyor Jeremiah Dixon as straight man and goof ball in a rollicking epic that deftly combines fiction and fact through a cast of characters that include the poet Timothy Tox, a Pynchon invention, and the very real Nevil Maskelyne, the Astronomer Royal and owner of one of the most evocative names in English history. The story of this dynamic duo's adventures is told by the Reverend Wicks Cherrycoke 20 years after the fact in his sister's Philadelphia parlor in an 18th century dialect which I fell into rather easily. (And now find Meself talkin' to the Cats in said Dialeckt.)

These adventures include stopovers in Cape Town to observe the transit of Venus, and the island of St. Helena, where the winds never stop howling and the locals never stop whoring, and a brief return home to England, where Dixon is entrusted with a perpetual motion pocket watch, a fictitious bit player in the real English-French competition eventually won by clockmaker John Harrison, who constructed the first seagoing timepiece that could accurately determine longitude.

Pynchon beautifully describes Mason and s arrival off of the cape:

"From the shore they will hear Milkmaids quarreling and cowbells a-clank, and dogs, and Babies old and new, -- Hammers upon Nails, Wives upon Husbands, the ring of Pot-lids, the jingling of Draft-chains, a rifle-shot from a stretch of woods, lengthily crackling tree to tree and across the water. . . . An animal will come to a Headland, and stand, regarding them with narrowly set eyes that glow a Moment. Its Face slowly turning as they pass. ."

The pair meet and party with Benjamin Franklin, who is showing off a pair of tinted sunglasses, his latest invention, and smoke hemp with George Washington, who gets the munchies and jabbers in Yiddish, before they set out to try to settle the blue blood royal border dispute between the Calvert family of Maryland (the various Lords Baltimore) and the Penn family of . . . well, you can figure out where they're at.

Mason and clear cut their way through hundreds of miles of forests thronging with Indians with a rag-tag collection of axmen, purveyors, cooks and kooks, including R.C., a local land surveyor and resident of The Wedge, where , and meet hard by Kiko’s House and described by the author as a carnival of fee churning by generations of attorneys outlaw . . . er, at law:

"To be born and rear'd in the Wedge is to occupy a singular location in an emerging moral Geometry. Indeed, the oddness of Demarcation here, the inscriptions made upon the body of the Earth, primitive as Designs prick'd by an Iroquois, with a Thorn and a supply of soot, upon his human body, -- a compulsion, withal, supported by the most advanc'd scientific instruments of their Day, -- present to Lawyers enough Litigation upon matters of Property within the Wedge, to becoach-and-six a small Pack of them, one generation upon another, yea into the year 1900, and beyond."

In any event, R.C. covets Dixon's perpetual motion pocket watch, which he steals and swallows when found out, giving new meaning to the old Timex slogan that "it takes a licking but keeps on ticking." R.C. subsequently drives his wife and children batty because of the never ending ticking coming from his stomach.

But I doth digress.
Dixon is a bit of a prankster and the rare Quaker of the day with a sense of humor and an eye for the ladies. He is never put off by the chilliness of Mason, a melancholic soul unable to connect with his young children and ever mourning his dear departed wife, Rebekah, who appears to him as a ghostly apparition.

As they make their way west to the Allegheny Mountains from their starting point near Philadelphia, Mason suffers repeated bouts of the creeps from the unrelentingly dark forests that is made only slightly better by the ministrations of Captain Zhang, a feng shui expert who assures him that Adam and Eve, Buddha and Newton were all enlightened while sitting beneath trees, but warns him that the line he and Dixon are drawing inevitably will lead to bad jujus:

"A quick review would suggest that Trees produce Enlightenment. Trees are not the Problem. The Forest is not an Agent of Darkness. But it may be your Visto [line] is. . . . .Nothing will produce Bad History more directly nor brutally, than drawing a line."

Although Zhang does not come right out and say so, those jujus certainly include the demarcation between the emancipated North and pro-slavery South.

In the end, Mason & Dixon is a pun-filled send up on the clockwork-like machinations of and metaphysical musings on the universe disguised as an 18th century novel. (Or at least I think it is.) My only criticism is a minor one -- that the book could lose a hundred or so of its 773 pages and be none the worse for wear. But then the same and then some could be said about Against the Day, which is doorstop worthy at 1,085 pages.

Oh. I nearly forgot to mention that amidst all this higher mathematics and low comedy, introduces pizza to , bestowing upon a lowly pub keeper the following recipe:

"Half a school of sardines in a sea of his beloved Indonesian ketjap atop a loaf pounded flat and sprinkled over with Stilton cheese."

Mason & Dixon is a delicious book; about the pizza I'm not so sure.
Posted by Shaun Mullen at 1:05 AM
Email ThisBlogThis!Share to TwitterShare to FacebookShare to Pinterest

I think you'll enjoy "Vineland", although it's not his best. Pynchon has a lot of fun with stereotypes from the 60's in it.

I never finished Gravity's Rainbow. You've inspired me to go back and try it again.

ha, i never finished any pynchon book, though he gets right in there and channels the vibe perfectly, it is on the way back out, climbing the ladder of words to speak of his vision, that i fall off every time. and finally conclude about the man and the author, so what?

one memorable short story though, called entropy, i finished and loved