When Expedience Trumps The Sisterhood 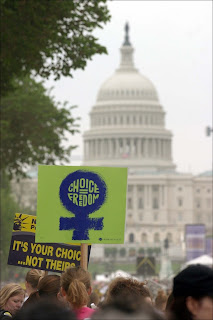 The fur is again flying in the feminist sandbox over the other big endorsement that Barack Obama received on Wednesday, this one from the National Abortion Rights Action League.

"A strong advocate for a woman's right to choose throughout his career in public office. He steadfastly supports and defends a woman's right to make the most personal, private decisions regarding her reproductive health without interference from government or politicians."

But you would have thought this leading pro-choice group had thrown in its lot with John McCain or Phyllis Schlafly. The reaction was fast and furious and sense of betrayal nearly suffocating.

The National Women's Political Caucus was:

"[D]isappointed . . . The Caucus knows Hillary Clinton to be a clear leader and a consistent champion of the issues that NARAL and NWPC have in common. We believe that this announcement at this time will divide the choice community at a time when we need to stand united."

"I think it is tremendously disrespectful to Sen. Clinton - who held up the nomination of a FDA commissioner in order to force approval of Plan B and who spoke so eloquently during the Supreme Court nomination about the importance of protecting Roe vs. Wade - to not give her the courtesy to finish the final three weeks of the primary process. It certainly must be disconcerting for elected leaders who stand up for reproductive rights and expect the choice community will stand with them."

The key words here are divide and disrespectful, because for these groups the primary election season has been all about getting a woman -- and a particular woman -- nominated. All other concerns have been secondary.

That's okay, but Obama's position on choice is pretty much identical to Clinton's, as NARAL recognizes. But NARAL recognizes something else very important, as well: That Obama stands a better chance of being the next president than Clinton and political expedience is paramount in the long run.

At the risk of bringing down further fire and brimstone from feminists who hew to a rigid orthodoxy and have blindered themselves to Clinton's determined self destruction, I have a daughter and my major charitable contribution year in and year out is to Planned Parenthood, so I feel like I have a stake in this as well even though I'm some old guy.

So chill, okay?
Posted by Shaun Mullen at 10:04 AM
Email ThisBlogThis!Share to TwitterShare to FacebookShare to Pinterest