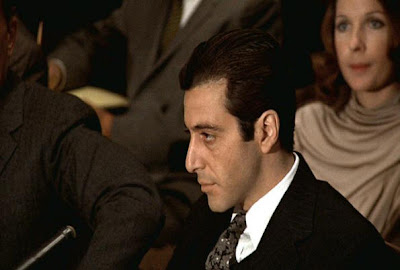 So you see the big problem for McCain. Embracing Bush is the antithesis of straight talk. Any time he feels obligated to go to bat for the president, he risks sharing the same bubble, where insinuations reign and facts are fungible - to the point where he even has the renounce his own previous words. He would be far better served if Bush said as little as possible between now and November, lest he again be lured back into the fold.

Which merely reminds me of Michael Corelone's lament, as he sought to go legit during Godfather III: "Just when I thought I was out, they pulled me back in."

Bush probably thought, "Well, I showed him." But any Bush versus Obama narrative assists Obama tremendously. Most Americans clearly would relish voting against Bush, were they able to. If Bush makes it seem that a vote for Obama is a vote against Bush, McCain is screwed.

Sen. Barack Obama went one step further today in his pushback against presumptive GOP presidential nominee Sen. John McCain and President Bush on appeasement, suggesting that both Republicans have a problem with presidents past who have engaged in direct diplomacy.

What happens to the Republicans in 2008 will likely be dictated by what didn’t happen in 2005, and ‘06, and ‘07. The moment when the party could have broken, on principle, with the administration – over the thinking behind and the carrying out of the war, over immigration, spending and the size of government – has passed. What two years ago would have been honorable and wise will now look craven. They’re stuck.

Mr. Bush has squandered the hard-built paternity of 40 years. But so has the party, and so have its leaders. If they had pushed away for serious reasons, they could have separated the party’s fortunes from the president’s. This would have left a painfully broken party, but they wouldn’t be left with a ruined “brand,” as they all say, speaking the language of marketing. And they speak that language because they are marketers, not thinkers. Not serious about policy. Not serious about ideas. And not serious about leadership, only followership.

Today's GOP spends so much time fretting about how to relive the Reagan heyday, it has failed to do him credit by laying out its own plans for today's unique challenges. It remains in hock to interest groups, running ads about sanctuary cities as Americans curse over gas prices. In a repeat of 2006, it spends more time trying to scare voters about Democrats than defining itself. It refuses to give up the earmarks that are a symbol of its worn-out reign.

This [Noonan] explains the almost touching devotion, tinged with desperation, that one can witness almost every day over at NRO's Corner, where one lunchtime slacker or another relays with excitement Rush Limbaugh's latest mouthblast of derision against spineless Republicans and gutless liberals--Rush was "on fire" today, they quiver, sounding like Nanny Hawkins huddled around the wireless marveling how Mr. Churchill just gave that Mr. Hitler quite a talking-to. Rush is the only last troop-rally'er this tired-blood brigade has left and their clinging to the backward tug of his stale certitudes (global warming is an enviromental-wacko socialist sham, etc) only widens the distance between them and the reality of how much damage kneejerk conservatism and blind Bush loyalty has inflicted on the Republican Party.

With each passing day, it seems a little less likely that the next president of the United States will wear a skirt — or a cheerful, no-nonsense pantsuit.

BIDEN: Well, I should — I’m trying to be more polite, but I shouldn’t be. It was ridiculous. This is president — this is pure, unadulterated politics. And the last point I’ll make — maybe the president doesn’t know — I’ll be a smart guy, here –maybe he doesn’t know what’s going on in his own administration. But as soon as he gets back, he should fire, as appeasers, Gates . . .

BIDEN:Because they both — Gates as recently as a week ago –said, we’ve got to sit down and talk with the Iranian directly.