Oil & The Future of Iraq 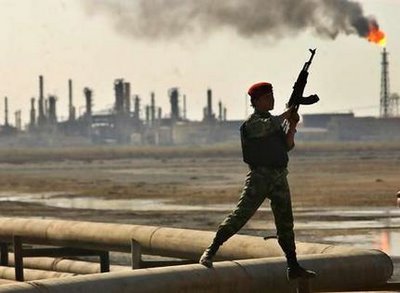 The war in has never been just about oil, but oil always has been a big part of what the war is about.

Oil is the mainstay of 's economy, and other than the than manufacture of those flag-draped coffins of civil war victims that are carried to cemeteries every day, it is the beleaguered nation's only growth industry.

But some huge imponderables loom behind those refinery smoke plumes.

What is going to happen to the oil industry after the all but inevitable withdrawal?

And most importantly, who is going to control the oil industry?

The stakes are enormous.

’s oil reserves are the world’s largest, some 100-billion plus barrels, according to Platform, the British public interest group. Up to 90 percent of remains unexplored because of years of wars and sanctions, although its oil production costs are among the lowest in the world. (It takes about $1 to produce a barrel of Iraqi crude at a time when prices on the world market are about $50 a barrel.)

Iraqi oil is even more important to imported energy-addicted American industries and consumers today than it was before the war. So is guaranteeing its uninterrupted flow from Iraqi fields to U.S. refineries as reserves in and elsewhere dwindle.

The Bush presidency, of course, is built on oil.

George Bush himself was a partner in several (largely unsuccessful) ventures in the Texas oil patch. Truth be known, his father pushed him into politics because he had been a failure at everything else. Many of the president's top campaign contributors were major oil companies. Vice President Cheney was president of Halliburton, the global war profiteering and oil services conglomerate. Numerous administration officials have close ties to Big Oil, including Secretary of State Rice, who was a Chevron director.

So it is no surprise that the White House has quietly but vociferously supported an end run around the Iraqi people to push legislation that would mortage the future of the state-owned oil industry to U.S. companies, including Exxon Mobil, Chevron and Shell, through Production Sharing Agreements. Under these PSAs, the companies would control all oil production from new Iraqi fields and reap a huge share of the profits for years to come.

Political Cortex notes, however, that:

"So long as a well-organized insurgency has seriously challenged foreign occupation, there has seemed little chance that the major oil companies would risk bringing their exploration, drilling and production crews into this dangerous and unstable country. The very divided government in made little progress for three years towards such a law that would divide up future oil revenues amongst the contending factions and spell out what share of the profits could be safely handed over to foreign exploiters without getting government officials hanged in the streets."

Nevertheless, enactment of the law is being pushed hard. But with likely to remain unstable for the near future, what’s the big hurry?

Uncertainty. And if there's anything that Big Oil hates, its uncertainty.

No matter the current political instability, including the widespread theft of oil by civil war factions to raise money from black-market sales, U.S. oil companies are anxious to ink what they believe would be a legally binding deal. This would go a long way toward dealing with the U-word and put them in the catbird’s seat no matter what happens in in the short term because they can exploit its vast oil fields in the long term.

As it is, the country’s oil industry remains a shambles because of a government that is incapable of meeting a single U.S.-set benchmark and is rife with corruption, as well as those ubiquitous security concerns.

"Iraqi ministries lack the capability to effectively budget, draw up and award contracts and get work done, leaving the government sitting on about $6 billion in unspent reconstruction funds, according to a report this month by the U.S. Government Accountability Office. Iraq's oil ministry, which has crippling problems in its oil pipelines and dilapidated refineries and export facilities, has been able to spend only $4 million of the $3.6 billion it has budgeted for repairs, the GAO reported."

For a country lurching toward democracy (or so the White House would have you believe), the push to formalize an agreement between the government and oil companies is going on out of the public eye and has received little mainstream news media attention.

Beyond the form that will take – be it a country with a centralized government, a crazy quilt of sectarian enclaves, or whatever – there is no bigger decision facing the Iraqi people than the future of its oil industry, but they will have no input.

A cabinet level government committee has produced a draft oil law with PSRs as its centerpiece with the involvement of the and Big Oil that would cede development and production from new fields for 25 to 40 years. The law was drafted in secret.

These interests are lobbying hard for the law's approval by parliament. The lobbying is going on in secret.

And what debate there has been, mostly involving Kurdish regional government interests who feel short changed, has been constrained. This is because even the draft of the law is secret.

A Global Policy Forum study titled "Crude Designs: The Rip-Off of Iraq's Oil Wealth," found that the consequences of the law could be devastating.

would lose much of the revenue that it desperately needs to rebuild, as well as the ability to regulate and plan its own oil industry, which in effect would leave Bil Oil immune from future legislation.

The study concluded that:

"These decisions should be made with the full participation of the Iraqi people, not in secret by unaccountable elites. Care should be taken not to take major irreversible steps that would later be regretted.

"Getting these decisions right is vital for the future of ."