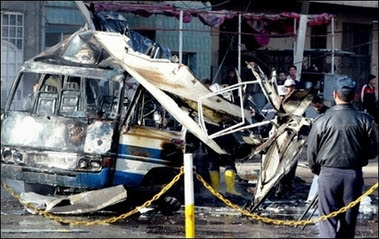 This war is a serious situation. It involves the worst foreign policy mistake in the history of this country. So we should take everything seriously. We find ourselves in a very deep hole and we need to find a way to dig out of it.

The war is tough, but the solution is not to get out. It is to provide the kinds of resources and reinforcements our forces need to get the job done, and at the same time say to the Iraqis "You guys got to step up."

What I would say to members of Congress is: Calm down and take a look at what's going on, and ask yourself a simple question: If you support the troops, would you deny them the reinforcements they think are necessary to complete the mission?

Oh what a malleable war has been. First it was waged to vanquish Saddam’s (nonexistent) nuclear arsenal and his (nonexistent) collaboration with Al Qaeda. Then it was going to spread (nonexistent) democracy throughout the . Now it is being rebranded as a fight against . Mr. Bush keeps saying that his saber rattling about is not “a pretext for war.” Maybe so, but at the very least it’s a pretext for prolonging the disastrous war we already have.