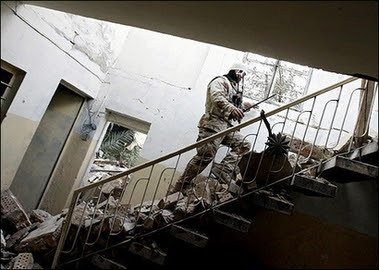 Lieutenant General Aboud Qanbar, who is leading the new crackdown, also announced the closing of ’s borders with and , an extension of the curfew in by an hour, and the establishment of new checkpoints.

Qanbar said the government would break into homes and cars it deemed dangerous, open mail and eavesdrop on phone calls.

No mention was made of the role American forces would play in the crackdown, but it seemed timed to coincide with President Bush’s “surge” strategy to send more troops into Baghdad.

American officers expressed surprise about the plan, while Samantha Power, a public policy professor at the John F. Kennedy School of Government, described the plan as either a public relations ploy or a prelude to more sectarian cleansing and catastrophe.

Power, who has written widely on genocide, said that:

"To do this in the middle of a war when tempers have been inflamed and militarization is ubiquitous seems to be putting the cart before the horse. You haven’t stopped the willingness to ethnically cleanse, but you’re imposing the moral hazard of ethnic cleansing on the cleansee? Unless you create security first, you are paving the way for a potential massacre of returnees."

More here.
Posted by Shaun Mullen at 5:58 AM
Email ThisBlogThis!Share to TwitterShare to FacebookShare to Pinterest