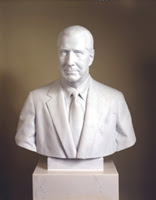 Lying about sex is an impeachable offense in , but not being detached from reality. Nevertheless, I want to revisit the idea of giving the vice president -- who really does seem to have gone through the looking glass -- the old heave-ho.

I argued here that trying to impeach George Bush would be an enormous distraction and for that reason I’m against doing so. But there is always the specter of the president not being able to serve out his second term, which would put Dick Cheney, one of the most disputatious politicians of any era, in the catbird seat at a time when the U.S. needs to move ahead and not be bogged down in the veep's alternate universe.

This concern led me to do a bit of research on the last time a vice president was in the crosshairs, which was 1973 when Richard Nixon’s vice president, Spiro T. Agnew, faced a tax evasion rap.

And so I stumbled upon this brightly-written gem from, of all places, the U.S. Senate’s official biography of Agnew:

Nixon had quipped that Agnew was his insurance against impeachment, arguing that no one wanted to remove him if it meant elevating Agnew to the presidency. The joke took on reality when Agnew asked House Speaker Carl Albert to request that the House conduct a full inquiry into the [tax evasion] charges against him. Agnew reasoned that a vice president could be impeached but not indicted. That line of reasoning, however, also jeopardized the president. For over a century since the failed impeachment of President Andrew Johnson, it had been commonly accepted reasoning that impeachment was an impractical and inappropriate congressional tool against the presidency. Agnew's impeachment would set a precedent that could be turned against Nixon.

A brief from the solicitor general argued that, while the president was immune from indictment, the vice president was not, since his conviction would not disrupt the workings of the executive branch. Agnew, a proud man filled with moral indignation, reacted to these arguments by digging in his heels and taking a stance that journalists described as "aggressively defensive."

Agnew eventually resigned. So how do we get Mr. Cheney to do the same?
Posted by Shaun Mullen at 5:04 AM
Email ThisBlogThis!Share to TwitterShare to FacebookShare to Pinterest