The Lessons of 'Lawrence of Arabia' 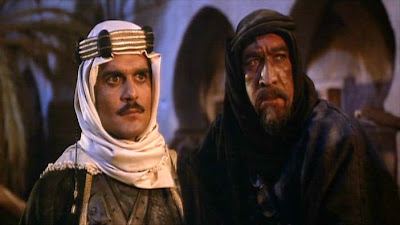 Arab tribal leaders Sherif Ali (Sharif) and Auda abu Tayi (Quinn)
When the word tribal comes up in connection with Iraq and the Middle East, most Americans turn off.

The concept of tribes is a dialogue killer. Because no matter how Americans view George Bush's war, most see the Iraqi people as shiftless, intellectually vapid, morally suspect and content to wander through the centuries without ambitions, goals or leaders. This, in their blindered view, explains why the Iraqis keep biting the liberating hand that tries to feed them.

It's not often that a movie can set the record straight, but Lawrence of Arabia is even more relevant and revalatory today because of how it debunks that perverse "tribal" view than when it won seven Oscars in 1962.

The Dear Friend & Conscience made that observation as we watched the movie for the umpteenth time on Saturday evening on Turner Classic Movies, which for my dinar is one of the small handful of excellent cable TV channels. Turner was wrapping up its terrific "31 Days of Oscar" series, which concluded with the 79th annual Academy Awards show last night.


* * * * *
T.E. Lawrence was a young British Army intelligence officer in Cairo who was dispatched to investigate the Arab revolt against the Turks in World War I. Once in the desert, he found that he had an affinity for and understanding of the disparate but freedom-loving Arab tribes he encountered.

Lawrence organized these tribes into a guerrilla army that he led in a series of harrassing raids against the Turks, who eventually were routed, marking the end of the Ottoman Empire and the beginning of the British-French partition of the Middle East. This profound betrayal of the Arab cause included the arbitrary line drawing that led to the creation of modern-day Iraq.

The British occupation of Iraq ended ignominiously, of course, and more closely parallels the ongoing American misadventure than oft-cited comparisons to the Vietnam war. The British example is generally overlooked, although Lawrence's "Seven Pillars of Wisdom," the masterful tome on which the movie is based, is assigned as required reading by some American officers.

The Marines see their challenge as being the same as the one faced by that young English officer: organize an Arab fighting force to confront a common enemy. Lawrence was working for the British, helping direct an Arab uprising against the Ottoman Empire during World War I. But then as now the Westerner’s promise was the same: a measure of safety and self-governance if the foe can be defeated. . . .

Now, as the quick knockdown of Saddam Hussein's regime has turned into the hard slogging of waging a counter-insurgency, Marines say Lawrence's advice and warnings are more timely than ever. On the ground in Iraq’s volatile Anbar Province, Marine officers swear by Lawrence. Col. Larry Nicholson, commanding officer of the 5th Marine Regiment, says in picking officers to interact with Iraqis he looks for 'people skills' -- not the kind of attribute one usually ascribes to a fighting force.

Nicholson was wounded by a rocket attack on his headquarters at Camp Fallouja, went home to recuperate, and then returned to the fight. When he tells Iraqis that he has shed blood in Iraq, it makes an impression.

"'I spend a lot of my time eating goat and sipping tea at dinners and meetings where the first half is spent talking about families," Nicholson said. "If you can’t do that, you can’t do the job." Lawrence also counseled that it is sometimes difficult to decide which tribal leaders are real and which are poseurs. State Department operatives working with the Marines in Anbar bemoan time lost working with "fake sheiks."

If Lawrence had one major warning for Westerners inserting themselves into Arabia, it was this: "The foreigner and Christian is not a popular person in Arabia. However friendly and informal the treatment of yourself may be, remember that your foundations are very sandy ones. "

He also suggested modest aims: "It is their war and you are to help them, not to win for them. "

Shaun, Wasn't it the 12 Tribes of Israel that got the cauldron fires so stoked in the first place?