What Happened to Sabrine Al-Janabi? 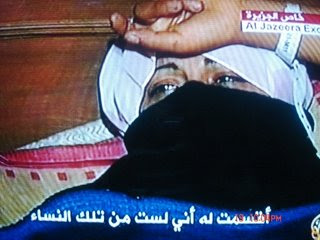 Sabrine is interviewed on Al Jazeera
The U.S. has again found itself in the middle of a hugely embarrassing no-win situation in Iraq because of the civil war it has fomented.

The "situation" is what what happened or did not happen to 20-year-old Sabrine Al-Janabi.

Beyond a small handful of well publicized cases, there is ample anecdotal evidence that Iraqi and American troops have raped women and men. But even in a country where violence is the norm and rhetoric can be superheated, rape is almost never discussed by anyone and is never mentioned by the victims.

What makes Sabrine different is that she is the first woman who has used her real name and publicly told her story -- of allegedly being taken into custody by three officers in the Iraqi national security forces who claimed that she was an insurgent sympathizer and then being raped by them.

The allegation, made in an interview on Monday night on Al Jazeera TV in which Sabrine told her story in graphic detail, has become yet another flashpoint for Sunni-Shiite tensions.

Sabrine is a Sunni and the security forces are dominated by Shiites. Sunnis say that she was raped; the Shiite-dominated government says that her story is a Sunni propaganda ploy designed to undercut the new Baghdad security sweep. Prime Minister Nouri Al-Maliki has denounced Sabrine, saying medical test show that she was not raped. He says that he has rewarded the security officers and then late Wednesday fired a top Sunni official who called for an international investigation into the allegations.

The U.S. finds itself caught in the middle.

Sabrine said that U.S. soldiers rescued her from the officers and gave her medical treatment. A U.S. military spokesman said that the incident was being investigated, while Al-Maliki said the U.S. can prove the claims to be false.


* * * * *
Riverbend was one of the first Iraqi bloggers, and while she posts infrequently from Baghdad these days, she speaks with clarity and authority, and her latest post on Sabrine is a compelling must-read.

Riverbend says that no Iraqi woman would make a false rape allegation and does not mince words about where she stands:

"I look at this woman and I can’t feel anything but rage. What did we gain? I know that looking at her, foreigners will never be able to relate. They’ll feel pity and maybe some anger, but she’s one of us. She’s not a girl in jeans and a t-shirt so there will only be a vague sort of sympathy. Poor third-world countries -- that is what their womenfolk tolerate. Just know that we never had to tolerate this before. There was a time when Iraqis were safe in the streets. That time is long gone. We consoled ourselves after the war with the fact that we at least had a modicum of safety in our homes. Homes are sacred, aren’t they? That is gone too. . . .

"And yet, as the situation continues to deteriorate both for Iraqis inside and outside of Iraq, and for Americans inside Iraq, Americans in America are still debating on the state of the war and occupation -- are they winning or losing? Is it better or worse.

"Let me clear it up for any moron with lingering doubts: It’s worse. It’s over. You lost. You lost the day your tanks rolled into Baghdad to the cheers of your imported, American-trained monkeys. You lost every single family whose home your soldiers violated. You lost every sane, red-blooded Iraqi when the Abu Ghraib pictures came out and verified your atrocities behind prison walls as well as the ones we see in our streets. You lost when you brought murderers, looters, gangsters and militia heads to power and hailed them as Iraq’s first democratic government. You lost when a gruesome execution was dubbed your biggest accomplishment. You lost the respect and reputation you once had. You lost more than 3000 troops. That is what you lost America. I hope the oil, at least, made it worthwhile."

More from Riverbend here.
Posted by Shaun Mullen at 6:00 AM
Email ThisBlogThis!Share to TwitterShare to FacebookShare to Pinterest

Shaun, I don't know if you're aware of it but I'm the editor of something called “the Carnival of the Liberated” (hate the name but I inherited it) over at Dean's World, where Joe was once an associate blogger. It's a weekly survey of English-language Iraqi and Afghan blogs and I've been editing it for nearly three years. I've read every single post by every single identified English-language Iraqi or Afghan blog over that period.

Riverbend is, basically, an insurgency apologist. She's entitled to her opinion but she's not a reliable source for much of anything other than her opinion.

I have no idea whether Sabrine was actually raped or not. As to Riverbend's claim: pfui.

I have no doubt that members of both the U. S. and Iraqi military have committed rapes. I think this story needs a little more digging. What's the rate per 100,000? How does that relate to the U. S. rate? The Iraqi rate? It seems to me that zero credible evidence has been presented by anybody that there's anything other than incidental about this even if its true.

Thank you for your thoughtful response. You will no doubt note that while Riverbend, Chris Floyd at Empire Burlesque and other bloggers have bought into Sabine's story lock, stock and barrel, I was very careful to note that at this point we have a rape allegation that happens to have become a flashpoint in an ongoing civil war.

You may be right about Riverbend's politics. But she speaks with a passion about the disaster the war has become that is worth quoting.

Whether she was raped or not is almost incidental to the larger picture. How is the government supposed to stay together when every little event like this creates a crisis.

I knew it was most likely completely hopeless a few months ago when there were the mass kidnappings and the different parts of the government couldn't even agree on how many had been kidnapped! If the top officials have completely different realities based on sect and refuse to work together what chance does the country at whole have?

All that and more.

The major point to me is the U.S. has put itself in a no-win situation as regards the rape allegation, yet another result of a civil war that it fomented.

BTW, Shaun, there are Iraqi bloggers whom I've found to be good sources of information who are neither insurgency propaganda outlets nor shills of the Coalition. I'd be happy to share them with you if you're interested.

That would be great. Please email me privately.