Quotes du Jour on the Wars 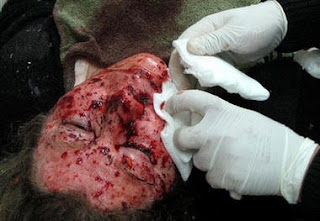 A woman is treated after a Baghdad suicide bomb attack

With Congress preparing for renewed debate over President Bush's Iraq policies, a majority of Americans now support setting a deadline for withdrawing U.S. forces from the war-torn nation and support putting new conditions on the military that could limit the number of personnel available for duty there, according to a new Washington Post-ABC News poll.

Opposition to Bush's plan to send an additional 21,500 troops to Iraq remained strong. Two in three Americans registered their disapproval, with 56 percent saying they strongly object.


The Democrats appear to have a special talent for incoherence. Here they are, holding the reins of power in both congressional chambers, and enjoying solid majority support from the American people, yet apparently they still don’t have a clue how to best confront an unpopular president who is waging a disastrous and unpopular war. . . .

So don’t hold your breath this week that the Democrats will get their act together, not when so few routes to unity seem available. And if they can't deal with , what will they do if Bush ups the ante and opts for direct confrontation with (the country that is now a greater threat, thanks to his misadventures in )?

The reason our mission in has proven to be so disastrous and corrupt is very simple -- the advocates and architects of that war are completely corrupt, inept, and deceitful. Recognizing this fact and ceasing to accord people like this respect and credibility is infinitely more important than any specific debates over particular policy or strategic questions. Everywhere Joe Lieberman goes, he should be asked by journalists why anyone should listen to anything he says, or believe anything he says, in light of his history of deceitful statements and tragically wrong assertions, beginning with his 2005 [Wall Street Journal] Op-Ed which today he completely repudiates while pretending he never said any of it.

These are people who are completely bereft of judgment and integrity, and their behavior has wreaked incalculable and arguably unprecedented damage on our country. Holding them accountable, and recognizing them for what they are, is critical not only for cleansing our deeply poisoned political system, but also for averting identical, or worse, tragedies in the very near future.

Democrats have started pressuring the White House to push [Pakistani PM] Musharraf harder, and it seems to have had an effect. Of course, the Bush administration has made more of an effort of late to call in markers. First, they told [Iranian PM] Nouri al-Maliki in no uncertain terms that he had to quit protecting the militias. Now they have made it clear to Musharraf that our aid won't go to someone who allows AQ to build bases in his country.

The Bush administration still rules out direct attacks on training camps inside , but someone will have to attack those camps. Bush will probably give Musharraf the same kind of talk he gave to Maliki about that, too. If an American attack on those bases will destabilize Musharraf -- and they probably will -- then Musharraf had best start doing it himself. We can't wait forever while Al-Qaeda re-establishes themselves as a fully operational terrorist group.

The Army's highest-ranking officer and the former leader of the secretive world of Special Operations offered his thoughts on the importance of capturing or killing Osama bin Laden during a luncheon Friday. They're probably not what anyone expected.

"I don't know whether we'll find him," said Gen. Peter Schoomaker, the Army chief of staff. "I don't know that it's all that important, frankly." . . .

"So we get him, and then what?" Schoomaker said. "There's a temporary feeling of goodness, but in the long run, we may make him bigger than he is today. He's hiding, and he knows we're looking for him. We know he's not particularly effective. I'm not sure there's that great of a return" on capturing or killing bin Laden.