The Dance of the Dragonflies 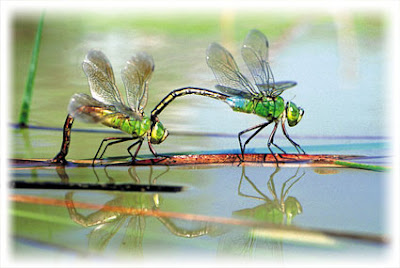 We're in the late February doldrums where I live in the U.S. There are banks of dirty snow on shaded slopes. Enough black ice on sidewalks and streets in the morning that bike riding is hazardous. Not much sun. That and the depressing world scene leads me to share a hot-weather essay on a favorite topic. Enjoy.
-- SHAUN

Dragonflies are among the world’s most ancient creatures and have been performing the mid-summer mating dance that I have observed almost every year of my life for 300 million years. That’s more than 100 million years before dinosaurs appeared.

I can remember being fascinated by this dance as a youngster, although I didn’t understand that it was all about making baby dragonflies.

My brother and I would trap lightning bugs in Mason jars to sell to the man at the agricultural research station. He paid us a dime a jar for his research into what made the bugs’ tails glow, but I would never consider trapping dragonflies for any amount of money. Even then they occupied a special place in my world.

Perhaps it was because their dance reminded me of dog fighting World War I flying machines, which captured my imagination at an early age, but I would like to think that the connection was more subtle.

Dragonflies colonize around creeks and ponds, so it usually wasn’t long before they were performing their dance around me. Sometimes they would alight on my forehead – even in mating tandems -- if I sat perfectly still and thought yoga thoughts and breathed yoga breaths.

Sometimes the male grabs the female by the head or thorax for a “quickie” without going through the dance. Other times the dance is long and elaborate, involving much diving and spinning, including mad charges in reverse, but in either event copulation takes less than a second. Sometimes male and female remain in tandem for several minutes, as if to say, “Was it as good for you as it was for me?”

Ring Rock (also known as the Rock That David Sat On) is a massive limestone remnant of the furthest extent of the last Ice Age that protrudes from the water at a 25 degree angle. It is so named because an iron ring had been pounded into the rock perhaps 200 years ago so that the locals could tether their wagons to it and lower them into the creek to be cleaned -- an early version of the car wash. I never learned who David was, but I would slide into the creek below the rock -- six or seven feet deep even in the mid-summer heat -- and watch the dragonflies dance. Alas, the rock attracted hikers and the occasional swimmer, so I moved on to the Burned Out Bridge.

A pair of overgrown fieldstone foundations on either side of the creek are all that remain of this 19th century covered bridge, which is said to have been torched by a man in the early 1950s so that he and his son could fish undisturbed. This is at a point just below where the west and middle branches of the creek converge, an area that is heavily silted and quite shallow. It took all of one summer and part of the next, but I methodically moved sand and piled rocks until I had fashioned a pool about four feet deep where I could resume my dragonfly encounters. My kids were too young to be of much help, but our big goofus of a black labrador retriever became pretty good at picking up rocks and dropping them onto the sides of our pool.

It was here that I began seriously expanding my horizons to other fauna as I would sit quietly at periscope depth.
There were rainbow trout (Oncorhynchus kykiss), restocked each spring for sport fishermen by the state fish and wildlife agency, and the occasional sunnie (Lepomis machrochirus), as well as some wee fishies that I was never able to identify. There were water-walking spiders (Dolomedes triton), black snakes (Elaphe obsoleta), a water moccasin (Ancistrodon piscivorus), which was a very rare sighting that far north of its southern habitat, and all sorts of toads and frogs, including little frogs called spring peepers (Pseudacris crucifer crucifer), so named because of the time of their arrival each year and their high-pitched trill. The black lab would slog into the marshy areas between the creek and woods and ingest mouthsful of them.

It was dragonflies doing their dance over the fountain.
Posted by Shaun Mullen at 6:54 AM
Email ThisBlogThis!Share to TwitterShare to FacebookShare to Pinterest