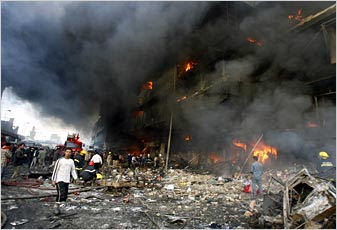 You gotta hand it to the relentlessly optimistic Glenn Reynolds over at Instapundit. He just can’t help but feeling all warm and fuzzy about the war.

This morning Glenn quoted an Iraqi blogger as saying that:

is still enjoying some days of relative calm interrupted only with minor sporadic incidents. In general there’s a feeling that these days are better than almost any other time in months. This is more evident in the eastern side of than the western part, because the former part has received more and Iraqi military reinforcements than the latter. . . .

After reading this bit of wishful thinking, I clicked on the CNN website only to see that a series of massive bomb blasts in the central part of had killed at least 90 people and wounded at least 170 others. The occasion? The first anniversary of the bombing of the Golden Mosque in Samarra, which is now widely considered to be the onset of the civil war.