Who Supported What When: Get Over It 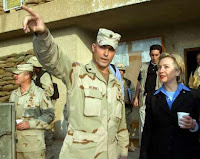 The level of unadulterated flapdoodle in the presidential campaign seems especially high this cycle, and nowhere more so than in the attacks on candidates for something they said, did or supported five, 10 or 15 years ago.

Exhibit A in this regard is Hillary Rodham Clinton, who like virtually all of her Democratic peers supported an war resolution in 2002.

Now I happen to think that is an opportunist of the first water who will get behind whatever will raise the most campaign cash and attract the most voters. I would vote for her only in desperation.

But she and I have something in common. We both once supported the war based on ginned-up intelligence that appeared to make the case that Saddam Hussein was a threat not just to the , but the whole fricking world.

The heat is on Hillary from left-wing yammerers to admit that she made a mistake. Well, she didn’t. And neither did I.

I'm with you on this one. Get over it.