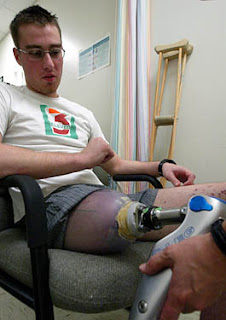 So how do you balance the federal budget? On the backs of disabled veterans is you’re the Bush administration.Reports The Associated Press:

After a $4 billion increase sought for next year, the Bush budget would turn current trends on their head, even though the cost of providing medical care to veterans has been growing rapidly -- by more than 10 percent in many years. White House budget documents assume that the veterans' medical services budget -- up 83 percent since Bush took office and winning a big increase in Bush's proposed 2008 budget -- can absorb a 2 percent cut the following year and remain essentially frozen for three years in a row after that.

The proposed cuts are utterly unrealistic in light of recent VA budget trends showing that a tidal wave of new veterans will be entering its rolls. According to one estimate, the administration has lowballed what the VA needs by 2012 – when it promises a balanced budget – by $16 billion

The number of vet coming into the VA health-care system has been rising by about 5 percent a year as the number of people returning from with illnesses or injuries keep rising. and war veterans represent almost 5 percent of the VA's patient caseload, and many are returning from battle with grievous injuries requiring costly care, such as traumatic brain injuries.

The VA expects to treat about 5.8 million patients next year, including 263,000 veterans from and .

I’m not a buy “write your congressman” guy, but this is one instance when you should do just that.