Iraq: Can the Dems Use Their Hammer? 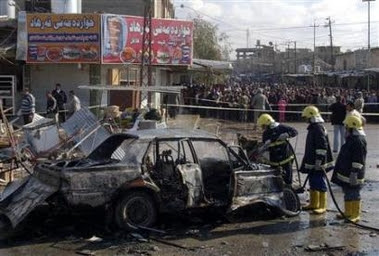 This Kirkuk car bombing today was binding. It killed 10 and wounded 60.

The Democratic-controlled Senate, again at the mercy of Republican procedural moves, was unable to approve the non-binding House resolution today opposing President Bush's plan to send more troops to .

Bully for the House. More raspberries for the Senate.

You can take heart at the House action if you've been banging your head against the wall over the runaway train that the Iraq war has become, but symbolism goes only so far and won't stanch the bleeding, let alone force the hapless Al-Maliki government to clean up its act.


In the meantime, the feeling persists -- and grows -- that the Democrats on the whole remain indecisive about how to use their mandate to try to hammer the White House into acquiescing to the majority of Americans. Those are the folks who are sick and tired of the Baghdad government's all but open support of the Shiite majority in the ongoing civil war, who want their sons and daughters brought home ASAP, and who do not want to allow the president to dump the enormous mess that he has made on his successor.

As Nicholas Rivera notes here, the rubber won’t really meet the road until the Democrats have to put our money where their mouths are; that is, act on a supplemental appropriations bill to fund the war through this year.

That will happen in about a month, which probably is enough time to judge the success – or failure – of President Bush’s "surge" strategy, which is yet another last-ditch effort to tamp down sectarian violence, and whether Al-Maliki has truly been a partner in that effort.

Or, as Nick wonders, are the Democrats:

"[S]imply going to let this war drag on for another year or two, gambling that the voters will again take their frustration out on the Republicans as they did during the 2006 midterm elections?"

I sure hope that I’m wrong, but I vote for the Dems wimping out.
Posted by Shaun Mullen at 5:59 AM
Email ThisBlogThis!Share to TwitterShare to FacebookShare to Pinterest