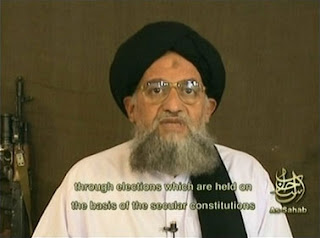 Ayman Al-Zawahiri is again a familiar Al Qaeda talking head
As surely as the sun comes up in the East, it was only a matter of time before American intelligence agencies would have to acknowledge that Al Qaeda, bowed but not beaten, has re-emerged in South Asia as a deadly force to again be reckoned with.

As surely as the sun comes up in the East, it was only a matter of time before insurgents would step up attacks outside of in response to the latest security sweep in the capital.

These would seem to be separate developments, but they are part of a larger whole.

In a coordinated assault on a U.S. combat outpost north of Baghdad, suicide bombers drove three cars laden with explosives into the base, killing two American soldiers and eight Iraqi police officers. The attack appears to be the work of Sunni insurgents allied with or possibly a part of Al Qaeda. At almost the same time, there were car bomb blasts in Baghdad against Shiite targets that killed 60 people, also almost certainly the work of insurgents.

Meanwhile, 1,500 miles to the west, senior Al Qaeda leaders operating from Pakistan have re-established significant control over their once-battered worldwide terror network and have set up a new network of training camps for their global jihad in the tribal regions near the Afghan border.

U.S. officials told The New York Times that there is mounting evidence that Osama bin Laden, still kicking after all these years, and his deputy, Ayman al-Zawahri, have established a new operations hub in the mountainous Pakistani tribal area of North Waziristan, which is at sharp odds with Bush administration pronouncements that the two men no longer have operational control of Al Qaeda.

Andrew Sullivan addresses what I'm calling the Mulberry Bush Syndrome, as in " 'round and 'round the mulberry bush the monkey chased the weasel" from the children's song:

" has long been the biggest shoe to drop in the Islamist terror war. If Al Qaeda can use the remote regions of for a new base, they don't need Anbar or . And the beauty of it, from their point of view, is that any Western attempt to coerce [Pakistani Prime Minister] Musharraf into wiping Al Qaeda out in could backfire, and give the Islamist forces within , and within its military and intelligence services, an opportunity to challenge the entire regime. So we're damned if we hang back; and we're damned if we go on the offensive."

And this from Josh Marshall:

"The whole endeavor in Iraq is no more and no less than a grand national joke we are playing on ourselves. We're having a clownish debate over Iraq as the center of a war on terror while the actual people -- in many cases, it would seem, literally the same people -- who plotted the 9/11 attack are on the rebound. How can anyone credibly deny that if most of our ground forces and budget weren't tied down in Iraq we would be far better able to react to this genuine threat?

"And we are unwilling to shift course because we can't come to grips with what has already happened."

Bush administration apologists say the new Baghdad troop "surge" security sweep should be given a chance. The corner is about to be turned. There is light at the end of the tunnel.

The sad reality is that as the brazen outpost attack and re-emergence of Al Qaeda bigs show, it is much too late to turn the war around. And all the while the Congress goes 'round and 'round its own mulberry bush getting bound up in unbinding resolutions.
Posted by Shaun Mullen at 6:00 AM
Email ThisBlogThis!Share to TwitterShare to FacebookShare to Pinterest