Iraq: 'Upper Halfs Are Over There' 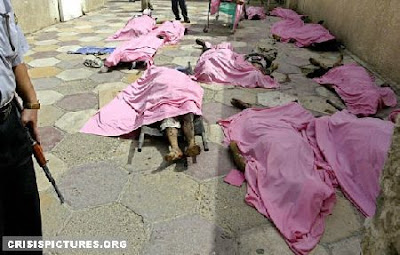 Inside is a blog written by McClatchy Newspapers staffers in . It contains a lot of stuff you won’t read in their regular dispatches, and this first-person account of women going to collect a body at a morgue, is a good example.

Incidentally, women are sent to perform this ghoulish task because they are less likely to be mistaken for terrorists.

When we got there, we were given his remains. And remains they were. From the waist down was all they could give us.

“We identified him by the cell phone in his pants’ pocket. If you want the rest, you will just have to look for yourselves. We don’t know what he looks like.”

Now begins a horror that surpasses anything I could have possibly envisioned. We were led away, and before long a foul stench clogged my nose and I retched. With no more warning we came to a clearing that was probably an inside garden at one time; all round it were patios and rooms with large-pane windows to catch the evening breeze Baghdad is renowned for. But now it had become a slaughterhouse, only instead of cattle, all around were human bodies. On this side; complete bodies; on that side halves; and everywhere body parts.

We were asked what we were looking for, “upper half” replied my companion, for I was rendered speechless. “Over there.” We looked for our boy’s broken body between tens of other boys’ remains; with our bare hands sifting them and turning them.

We found him millennia later, took both parts home, and began the mourning ceremony.

Can match our reality?? I doubt it.

I have to say, this is THE site to come to if you want to read how the war affects people without hearing a tirade on how Bush grins with glee at their suffering. It's necessary for people on both sides of the issue to get this kind of exposure, too often it's used as ammunition rather than raising awareness - a vital part in forming your opinions.

Thanks for keeping it neutral. And thanks for taking the time to put this in the spotlight.