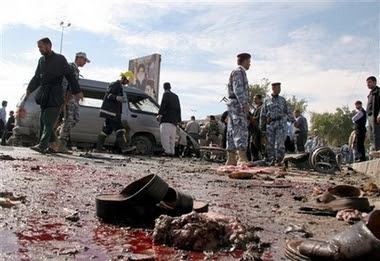 Two things are now abundantly clear about the future of U.S. policy toward Iraq. First, majorities in both houses of Congress have lost faith in President Bush's approach to the war. Second, the president will do all he can to resist changing his strategy by trying to split his critics into ineffectual factions.

Bush's choice is certainly bad for opponents of the war, but it's also bad for American foreign policy.

The president is inviting a full-scale confrontation over his warmaking powers in the expectation that the Democrats' narrow majorities will deprive them of the votes they need to win such a fight. He is ready to split the country rather than give any ground to those who ask whether it's wise to risk ensnaring American troops in a Sunni-Shiite civil war.

For the last few years our troops have been used like pawns on a chessboard, as if they were disposable, as if they were just a photo op. They aren't. They haven't even been replaceable, but that hasn't stopped the abuse. Cutting veteran's services and freezing their budget while calling for a surge, shows a complete lack of respect and a corresponding inability to plan for the future. A hallmark of the present administration. Unfortunately.

How much more incompetence can our troops endure?