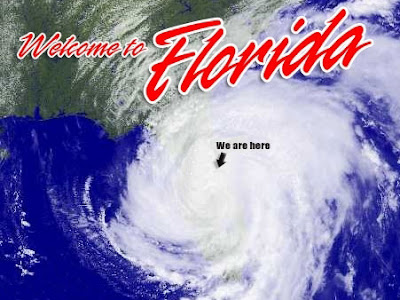 Anyone who has spent any time in South Florida knows that it is a freak show of the first water.


Dave Barry has his own explanation for why this is so:

"O.J. Simpson, for example. Why is he here? Did anybody in South Florida ever say, “Hey O.J.! Why don’t you pack up your golf clubs, your one glove and your remaining cutlery, and come be part of our community!”? Of course not! Nobody wanted him here. He was drawn here, by the Giant Underground Weirdness Magnet.

"Or consider the 2000 presidential election. . . . Another example is the Miracle Virgin Mary Grilled Cheese Sandwich. . . . Please do not try to tell me that this could have happened in an area that was not being bombarded with powerful weirdness rays.

"There are many other South Florida phenomena that can only be explained by the Giant Underground Weirdness Magnet, including the Versace slaying, the Elian Gonzalez fiasco, Tim Hardaway and Donald Trump. The current example, it goes without saying, is the Anna Nicole Smith Corpse Battle and Freak-a-Palooza, now playing in Fort Lauderdale. Of course it had to happen here. And of course, instead of a thoughtful, dignified, decorous, mentally stable judge, we got an American Idol contestant — sometimes sobbing like Dorothy when she had to say goodbye to the Scarecrow; sometimes firing off one-liners that he apparently thought were hilarious. Ha ha! Stop it, Judge, you Krazy Kourtroom Karacter!"

Hat tip to The Carpetbagger Report

Posted by Shaun Mullen at 4:35 AM
Email ThisBlogThis!Share to TwitterShare to FacebookShare to Pinterest