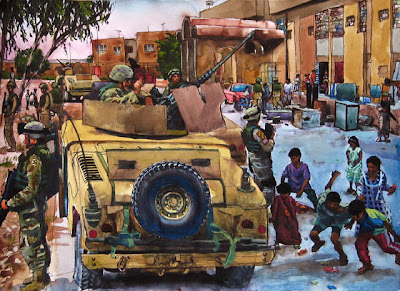 I was so much older then, I’m younger than that now.
-- Bob Dylan

Once upon a time I supported the war. In a spasm of suspended belief, I decided as someone who bleeds red, white and blue for his country that I should go along with George Bush’s declarations that Saddam Hussein was a threat even though I knew that my president was a devious liar who put politics ahead of policy. And that I was throwing my support behind what was bound to be a Godawful war.

This decision came, as it did for what I would imagine was a goodly number of people to the left of the right, on the morning of February 5, 2003, as I listened to Secretary of State Colin Powell use what we were later to learn was cooked intelligence regarding WMDs and nukes in declaring to the U.N. that Saddam was a very bad man. (At least he had the last part right.)

Bloodied and bowed, but a whole lot more alive than the 3,100-plus American soldiers who have made the ultimate sacrifice in Iraq, I look back on my four-year journey from reluctant supporter to vociferous opponent with shock and awe.

ANSWERING THE
I walked away from the newspaper business after a 35-year career as an editor, reporter and sometime photographer 10 weeks before the 9/11 attacks. How was I to know that I was about to miss out on the biggest story since the O.J. Simpson trials?

The first and second hits on the occurred in the time it took me to drop off a consulting job at a printshop and drive under unforgettably brilliant blue skies to the mountain cottage of the Dear Friend & Conscience. The DF&C had gone fetal while listening to radio reports on the attacks. (She didn't then and still doesn't have a TV, so it strained our credulity that first one and then the second tower actually had collapsed.) Meanwhile, I was like a fireman without an axe who was raring to do something, anything, as the journalist in me answered the bell.

First I ascertained that everyone I knew who might be in harm's way was okay.

My brother had fled his office building unscathed and was okay. Friend Phil had stumbled from Wall Street through the smoke and debris to the sounds of the foghorns of the ferry boats evacuating people from the docks. Once he reached the river, he turned uptown and walked the hundred or so blocks to the safety of his apartment in . He was okay. My son also was okay and was watching the angry clouds of black smoke rising above the Pentagon from a rooftop in .

Relieved as I was that the people I knew were out of harm's way, I was horrified about the thousands who were not, as well as how utterly unprepared the U.S. had been for this second Pearl Harbor.

This horror, mixed with journalist adrenalin, soon turned to anger which I channeled into an email to the sister of a friend, a clueless Republican operative who had ridden into on Bush’s coattails and had it made in the shade with White House access and a swell little townhouse in .

“Couldn’t you have seen this coming?” I thundered in a profanity laced message. “Don’t you understand that you and Bush and your ilk are responsible for this?”

I admit that I was overwrought and not a little unfair to my friend’s sister, for whom national security was being able use an ATM wherever her political junketeering took her. But it was that passion -- and the journalist in me who keeps answering the bell – that led me to start writing about Bush’s big response to 9/11, which of course was a hat trick of staggering proportions that involved starting the wrong war in the wrong place at the wrong time.

About a year into the war I graduated from scathing emails and began writing a semi-blog that I called Web Blatherings. This went out by email attachment to my extended family and by snail mail to the few Luddites of my acquaintance, including a friend who lives out in the desert in Utah and will leave this mortal coil without ever once having the experience of Microsoft Windows locking up on him.

This crude little email affair eventually morphed into Kiko’s House, a real blog that has grown slowly but nicely on the backs of those 3,100-plus dead Americans and eventually attracted the attention of another ink-stained wretch who invited me to become a co-blogger at The Moderate Voice. There I am able to expound on the war to a much larger -- if not always appreciative -- audience. (By the way, I still mail printouts to the guy in the desert.)

YOU SAY YOU WANT A REVOLUTION
The media revolution of the War was the use of the video camera, which enabled people to see in black and white what really was happening on the battlefield within hours after it had occurred, not days or weeks later.

The media revolution of the first Gulf War was the use of the satellite TV phone, which enabled people to see grainy color images of the Scud Stud and other talking heads from Baghdad hotel rooftops, all in real time.

The media revolution of the second Gulf War has been the blog, which enables people to bypass the mainstream media and go behind and beyond what's being reported about the war.

That has been a blessing and a curse for this blogger.

As my son notes, pretty much everyone has made up their minds about the . As the DF&C notes, there are some people who just don't get it and never will. And as a vicious asshole commented in response to what I thought was a particularly sage piece of my wisdom, why should anyone care about a single Iraqi? Kill the whole bunch of them, the asshole said, or at least the Muslims.

Early on, I blogged about every jot and tittle regarding the war. I also reached out to Iraqi bloggers and liberally excerpted their first-hand accounts. I was so into it that I even posted a sound clip of the gasoline-powered generator that one blogger uses because Rumsfeld Power & Light keeps pulling the plug on her.

I felt the need to better know the neighborhoods that I kept reading about and seeing on TV. After considerable searching, I found a large and detailed color map of that I put over my computer. It is beautiful because it shows the rivers, canals, boulevards and airports of this once vibrant city, but deceiving because it does not show the bombings, kidnappings and ambushes.

But after a while I got the same sort of feeling I had years earlier after being called out of bed in the middle of the night countless times to report on fires and plane crashes. I was covering the little picture but missing the big picture. And getting very depressed.

I still will occasionally blog about a battle or bombing, but I am trying awfully hard to stick to the big-picture. And still getting very depressed.

This big-picture stuff has included the kind of conditions that American troops are fighting under, the blurring of the so-called rules of engagement because of the shifting rationales for the war, and the instances when these men-boys snap in places like Haditha and Mahmudiyah.

It has included efforts to get beyond the numbers, including in-depth posts on the methodology behind a study on Iraqi civilian deaths that provoked a firestorm of criticism, a piece on forgotten victims of the war -- the millions of Iraqi children robbed of their childhoods -- and most recently a look at the disturbing trend in U.S. helicopter shoot downs by insurgents who may be using advanced weaponry.

There are opportunists in the blogosphere who are using the war to promote themselves. Am I one of them? The answer is an equivocal yes. Of course I'm promoting myself every time that I click on the PUBLISH button and send my thoughts out into the blogosphere.

That noted, I would like to think that I am helping pierce the fog of this war. Nevertheless, I can hardly bear to look at that Baghdad map any more, although it’s a rare day that I don’t get up ready to answer the bell.

By my rough count, I have written about 500 pieces on the war. This falls short of the number of bylines I got covering the O.J. Simpson criminal and civil trials, but at least they had endings.

I’m not so sure about the war.

Image:
"Charlie 1-153 Off Street" by Steve Mumford. More here.
Posted by Shaun Mullen at 5:59 AM
Email ThisBlogThis!Share to TwitterShare to FacebookShare to Pinterest

Wow, you sure are easily led around by the nose by the MSM. Perhaps if you simply stopped reading and watching them you would cease to be so depressed.

BTW, if you haven't been there and seen it with your own two eyes, there's really no way to make you understand. You still may not because you would be too busy being scared to death by all your preconceived notions about what you should be experiencing there.

Just keep in mind: television distorts reality in virtually everything it covers. Iraq is no different.

p.s. Oh yeah, and please stop emailing me whenever you have a new blog post. If I want to read more of your bedwetting drivel I know where to find you.

Always good to read your thoughtful and nuanced comments. Be safe.

Whatever idealism was involved with the Iraqi invasion, it was lost in actual practice.

Your thoughtful piece expresses your passion about this subject, which has come through in your writings on Iraq. I, for one, have appreciated your voice.

For me, blogging has been an outlet for my frustrations at the direction of the country. However, it's no good if it gets to the point that it adds to your angst. But don't give it up altogether. Give this subject a rest.

Perhaps a diversion in your blogging is in order. You can always cover the antics that will no doubt arise with the Philly Mayor's race, as well as the Fumo follies.