Update: Another Funeral in Philadelphia 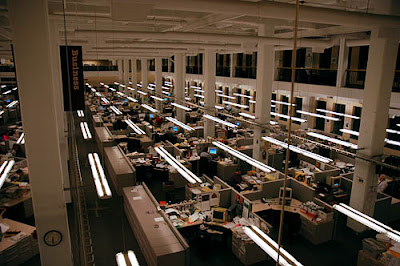 Back on January 5, I put up a post titled Media: Another Funeral in , regarding yet another round of layoffs at that city’s imperiled daily newspapers. I noted in the course of the post that the websites of the newspapers, the Inquirer and Daily News, are notably sad affairs.

This is unfortunate because these websites -- which include online-only features such as blogs -- are one of the few opportunities to reclaim lost readers and grow new ones in an age of plummeting newspaper sales.

Yet despite that reality, the papers' managements seem unwilling or incapable of breathing new life into their websites even though the futures of their papers are literally on the line.

Now, in a development that is puzzling on its face, the Inquirer has shut down a popular blog and reassigned the blogger to be a columnist. Why puzzling? Because the blog did exactly what newspapers need to do more of — build relationships with their communities through conversations with readers. (More about this in a bit.)

My criticism of the News, where I toiled for 21 mostly happy years, generated lots of comments, including a fair number from indignant former colleagues. But not one disagreed with my view that the News’s website is badly in need of a complete makeover.

In the course of this back-and-forth, News editor Wendy Warren mounted a spirited defense of the paper, but also agreed that the website was problematic.

As I told Wendy:

"You speak volumes about the lack of that creativity thingie in the newsroom that I have hammered on ad nauseum when you acknowledge -- as if it had never occurred to you before -- that your website sucks. Sorry to be the one to break the news, but that sucky website is pretty much your future, not dropping off bundles of papers at newsstands. The website has been treated like a bastard child since its inception and it shows. . . .

"Here's a challenge: Kiko's House is going to revisit the sucky website issue three months hence. We'll see then if there have been substantive improvements. If so, I will be the first to acknowledge them and congratulate you and your peers on your creative thinking."

Well, I’m going to go back on my word because of an interim development: The aforementioned end of a must-read Philly-centric blog at the Inquirer called Blinq with the departure of Dan Rubin to the metro desk, where he will become a columnist.

Dan professes to be delighted about the move and I hope he is. Yes, his new column will be available online. If you can find it.

Still, what not long ago would have been viewed as a promotion might be considered a demotion in this cyber age. But then again maybe not since the Inky did such an indifferent job of promoting Blinq despite Dan's ability to build new relationships for the paper through conversations with his readers, as well as the region's vibrant blogging community.

It would appear that newly minted Inky editor in chief Bill Marimow has made an ill-considered decision to kill a blog in order to perpetuate a column.

This is no small matter since Marimow's homecoming is viewed as perhaps the last best chance to save a publication that used to claim to be the longest continually published newspaper in America and continues to founder under a new ownership group led by Brian Tierney.

JudiPhilly has more to say about the demise of Blinq here at Truth, Justice & Peace, while Sherry W. recalls at Metroblogging Philadelphia that Marimow's predecessor, Amanda Bennett, had announced in the spring of 2005 that:

"[T]he Inky would soon be dispatching one of its reporters to the online beat, blogging full-time -- an experiment in reporting on new and old media through the new media."

Boy, if that doesn't capture the beauty of newspaper blogging!

Bennett was, of course, referring to Blinq, which on the day that Dan announced his departure still was carrying the same desultory "Tour Daniel Rubin's '06 Gems" headline although we are well into 2007.

In fairness, the Inky has several other blogs. And in a sign of new life in the old gal, Marimow has brought on two heavyweights -- Mark Bowden and Michael Smerconish -- as Opinion section columnists, although doncha know that I was unable to find mention of, let alone links to, either guy on the website on Monday.

Oh wait! My bad. Bowden and Smerconish are commentators, and I was able to find their commentating through another link.

Six weeks (or about half way) into my three-month challenge to Wendy Warren, there has been no change to the News’s website. In fact, a new improved template that the webmaster had said was on order last year, is nowhere to be seen. It's embarrassing.

Let’s be clear: Just because I say that the News’s website needs a complete makeover (and everyone who left a comment agreed) doesn’t mean that the editors with big offices should jump to that task.

But the suspicion grows that this gang -- including Brian Tierney -- just can’t shoot straight.

I’ll provide an update in another six weeks.
Posted by Shaun Mullen at 5:30 AM
Email ThisBlogThis!Share to TwitterShare to FacebookShare to Pinterest