Quotes du Jour on the War & Other Stuff 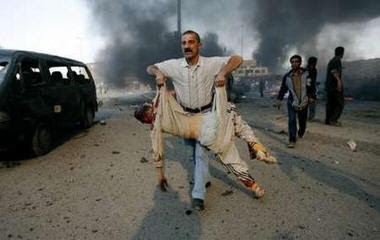 Almost five and a half years ago, America — united by the shock of 9/11 — understood exactly what it needed to do. It had to find, thwart and take down the command structure of Al Qaeda, which was responsible for the deaths of 3,000 innocent people on American soil. Despite years of costly warfare in Afghanistan and Iraq, America today is not significantly closer to that essential goal.

At a crucial moment, the Bush administration diverted America’s military strength, political attention and foreign aid dollars from a necessary, winnable war in Afghanistan to an unnecessary, and by now unwinnable, war in Iraq. Al Qaeda took full advantage of these blunders to survive and rebuild. Now it seems to be back in business. . . .


Having failed to finish off Al Qaeda in Afghanistan, Washington now finds itself fighting Qaeda-affiliated groups on multiple fronts, most recently in Somalia. Al Qaeda’s comeback in Pakistan is a devastating indictment of Mr. Bush’s grievously flawed strategies and misplaced Iraq obsession. Unless the president changes course, the dangers to America and its friends will continue to multiply.


To get out of the ditch, America must change its Iraq policy, soon. That doesn't mean pulling out of Iraq quickly, as many Democrats in Washington seem to favor. I found few people [at the Doha conference] who thought a quick American pullout made sense. But it does mean shifting the American focus -- so that we are talking with Iraq's neighbors and negotiating with the Iraqis on a timetable for withdrawal of U.S. troops. . . .


And to get back on the road, for real, America must broker a settlement of the Israeli-Palestinian dispute. I winced when I heard Prime Minister Olmert say last weekend in Jerusalem that "the American and Israeli positions are totally identical" on the terms for recognizing a Palestinian unity government. The Israelis are right in insisting that Hamas must recognize Israel's right to exist. But how to get there? What if Secretary of State Condoleezza Rice had responded: America is a mediator in this conflict. Its positions are independent of either side, and it is willing to talk to all parties to achieve peace.

I would have loved to see the looks of astonishment from the America-bashers here.

Photograph by Carlos Barria/Reuters
Posted by Shaun Mullen at 4:48 AM
Email ThisBlogThis!Share to TwitterShare to FacebookShare to Pinterest