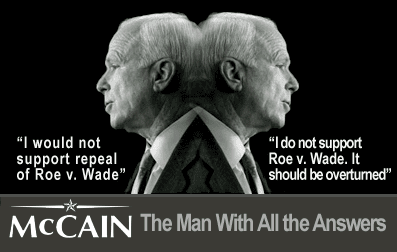 In life and in war, turnabout is fair play, and that may be nowhere more true than in politics.

And so we have the sorry sight of John Kerry flip-flopping on yet another issue and sucking up to yet another right-wing constituency . . .

Kerry has quit politics. It’s John McCain, that "maverick" Republican presidential candidate, who has become a champion flip-flopper on a dizzying array of issues.

I am taking McCain's conservative dumpster diving -- you know, sucking up to Pat Robertson one day and Jerry Falwell the next -- somewhat personally because it was not too many moons ago that I was able to rationalize voting for the guy if the Democratic candidate in 2008 was more weak tea like Kerry.

So lets hear from everyone who was relently critical of Kerry now that Big John has upstaged him.

Thanks to Jesus' General for the image