Weather or Not, It Was a Disaster 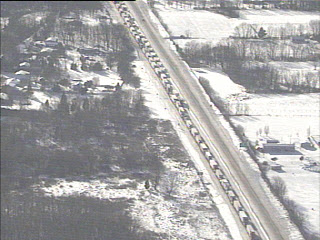 There was some nasty weather in on Valentines Day, a mixture of snow, sleet and freezing rain.

That kind of weather is not unusual, but by the time the last flake had fallen, there was a 50-mile backup on one interstate highway and major stretches of two others had to be closed. In some cases, motorists were stranded for over 24 hours and had to be rescued by National Guardsmen with water, food and blankets.

The reason for this disaster had less to do with Ma Nature than a total collapse of ’s emergency response system.

This is the system that has received millions of dollars in federal money since the 9/11 attacks but couldn’t even figure out what highways were open and why interstate ramps were not closed, allowing thousands more cars and trucks to stack up behind already enormous backups.

The cluless state emergency center compounded the confusion by sending incomplete and erroneous information to county emergency centers, in one case reporting incorrectly that the eastbound lanes of a major interstate in the Poconos were closed when in fact it was the westbound lanes.

Governor Ed Rendell, whom I happen to think is a great guy when he's not screwing up, is taking the blame. He has declared that the state’s handling of the storm and backups were “totally unacceptable.”

That, Mister Ed, is putting it lightly.

This was a freaking winter storm and by no means the worst one in recent years. I shudder to think what would have happened had there had been a terrorist attack at a refinery, nuclear power plant or one of the state’s huge military arsenals.

There’s going to be the inevitable investigation, but that will not be enough.

Heads have to roll.