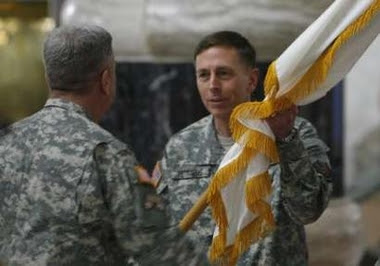 Anyone who knows much about General Petraeus might agree that David Petraeus seems to have been born and raised to win this particular war. Frankly, the odds seem nearly impossible. is broiling and it's getting worse. But there are glimmers of hope, and I see those glimmers with my own eyes here in . Troop morale is still good to high, and Iraqi Security Forces are improving, for instance. But make no mistake: has asked David Petraeus to walk into a burning barn and perform brain surgery on a dying patient. If it can be done, David Petraeus is our man. The odds are against him. Personally, I am betting on General Petraeus, his staff, and the great number of hard-minded people who believe can stand again. This means I am betting for the good guys, and against the terrorists.

I am not naive; I was the first writer, back in early 2005, to begin loudly proclaiming that was in civil war. People said I was "pessimistic," or did not know the definition of "civil war." I was the first, to my knowledge, to outline that will become a bloodbath during the Spring of 2007. Yet I believe that today we have found the right mix of knowledge and experience to succeed in .

Please Find Below "Ghost of Arafat", a January 05 Piece Stating Iraq War Status Which Has Not Changed Since

Overview:
The Sunni insurgents are a viable fighting force numbering in the tens of thousands. At no point in our lifetime will they be defeated.
Therefore political accomodations may be made to install peace in Iraq, but there is categorically no 'victory' available.
The enemy we set out to defeat, the forces of Saddam and the Baathists, are still viable and present on the battlefield. We have backed new governing forces, which already reek of Baathist misconduct and which also must accomodate the insurgents politically to survive. There is no victory ever to be had in Iraq.
(That the dominant political civilian overseers (Bush / Cheney / neocons) lack both desire for and any visible skill in negotiating makes the difficult simply impossible.)
A sincere best of luck to Gen. Petraeus.

Ghost of Arafat
January 11, 2005
Iraq is now a civil war. We have simply chosen a side. References to Vietnam are tactically correct, but passe politically. The analogies are Israel/Palestine, American Revolution and Northern Ireland.

The ghost of Arafat will appear from the Sunni side and George B. to his enormous bile-choking displeasure will have to deal. Were that it were otherwise but this is written.

Fielding one per cent of the Sunni fighting-age men as active insurgents/freedom fighters with three percent as cadre (40,000) creates a stalemate. They can not dislodge us and our Shia forces nor can we pacify them.

Personally I would find this leader (or group) now and begin the next phase. Offer them administrative control of electric and water reconstruction projects. They create no-kill, no-maim zones, implement the projects, Halliburton yes, Halliburton no, who cares, and we release the money on a quasi 'completion' basis.

This gambit lacks all pride and ego but we do get to stay a while.

Sarge might say "Light em if you got em," for a change.

Correct -- and profoundly so.