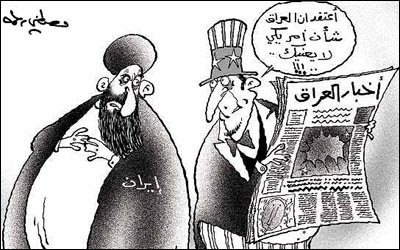 U.S. TO IRAN: BUTT OUT OF IRAQ, BUD
The Bush administration appears to be on the verge of escalating its war of words against y accusing it of harboring Al Qaeda terrorists in an effort to win support for tougher U.N. sanctions.


For anyone who has followed the devious aspects of the White House's campaign against Iran, it should come as no surprise that there is a wee problem with the allegation:

While there is no question that Teheran government has supported the insurgency in Iraq, there is evidence that it doesn’t want terrorists playing in its own sandbox.

As recently as last week, reports The Washington Post, the CIA sent an urgent report to the National Security Council stating that Iranian authorities had arrested two Al Qaeda operatives traveling through Iran on their way from Pakistan to Iraq. The arrests were presented to President Bush's senior policy advisers as evidence that appears committed to stopping Al Qaeda foot traffic across its borders.

Meanwhile, The New York Times reports that U.S. intelligence agencies have ascertained that the most lethal weapon directed against American troops in Iraq is an explosive-packed cylinder supplied by Iran.

So there you have it:

Still more evidence that Iran is indeed wreaking havoc in Iraq, but a White House so accustomed to distorting the facts and obfuscating that just can't resist the temptation to take the low road.

Iran is a threat in Iraq and the U.S. must push back. But what little credibility it has regionally and on the world stage will be further diminished when the distortions and lies are revealed. And as with the cooked pre-Iraq war intelligence, they will be revealed sooner or later.