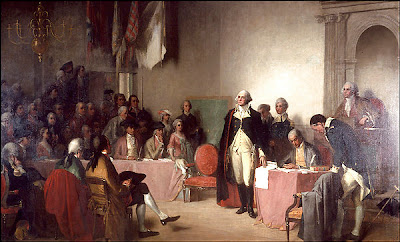 steps down as commander in chief
I was so PO’d that the worst president in history had the temerity to compare the Revolutionary War with the Iraq war in a speech at Mount Vernon honoring one of the greatest presidents in history on President’s Day that I nearly threw one of the cats at the TV.

What a waste of good cat that would have been!

But I have cooled down, and in honor of the George Washington’s 275th birthday, which is today, damnit, I am providing this link to a .pdf file of the Great Man's brief but memorable resignation speech as commander in chief at the Statehouse in Annapolis, Maryland, in 1783.

Read it, contemplate the mess the great nation he led is in today, and weep.

Posted by Shaun Mullen at 5:57 AM
Email ThisBlogThis!Share to TwitterShare to FacebookShare to Pinterest

Let's be objective here. Even if George Bush IS the worst president in history, we won't know that for several years to come, at least. Lincoln was one of the most hated presidents while he was in office and usually makes the top 3 in the so-called presidential ranking surveys.

I think what really happened is you saw someone you really can't stand (because you're political polar opposites) trying to give a rah rah speech and it had the opposite effect. It would be the same as your average white man watching a Malcolm X rally in the 60s.

I come here every day because the commentary is inciteful and, I feel, rounds me out. There are very few left of center blogs I can go to anymore that haven't simply stopped thinking and started spouting reflexive drivel.

I guess I just don't want that to happen here, is what I'm trying to say.

I would hate to lose any reader, but I am unable to retreat from or soften my judgment of George W. Bush, which is not a knee-jerk reaction but rather something I arrived at after careful deliberation.

While you are quite right in suggesting that history will be the final arbiter, there is NOTHING that Bush has done domestically or internationally that is positive or will be seen in future years as having had a salutatory effect.

If you believe otherwise, please say so. A healthy discussion would be far preferable than driving you away.

A final thought: Although I have never bonded with Bush, I have wished him no ill will nor had an ideologically-driven malice toward him. I wanted him to succeed and, in fact, supported the war early on.

Ha! You're not even close to losing me as a reader.

I can't disagree more with the statement that he has done nothing positive. In fact, until the war was proven to be a mismanaged debacle he had a pretty good following.

Afghanistan was a positive move. There's very little support the other way. I've seen, personally, the positive effects the PATRIOT Act has wrought - but that's the benefit of working under the federal law enforcement umbrella. Bush's pharmacalogical R&D efforts not only show positive forward movement, but it also shows the man can change his mind. Even the Huffington Post had to give him that one (http://www.huffingtonpost.com/james-love/bush-administration-plays_b_21714.html).

I'd also say take a look at his Africa policy (http://www.whitehouse.gov/infocus/africa/).

I can't argue what the long term effects his policies will have yet. And we've seen the immediate negative effects every single day, over and over, in every media format available. It's a shame you have to search for the positive ones because they are there and some of them are big changes.

Nice try, but no cigar.

Talking the talk is not what the history books will focus on. It is walking the walk.

Bush had a "pretty good following" for eight months during which he did squat. Then came 9/11 and an enormous upswell of support from myself and many other Americans. He talked the talk but did not walk the walk. No president in history has squandered such a mandate. You will read that in the history books.

Afghanistan: Started the job but didn't finish it because he declared the wrong war in the wrong place at the wrong time.

Patriot Act: Get real. This was an act of cowardice that undermines the foundations of the Constitution and American system of jurisprudence.

Pharmacological R&D: Yeah, how about all that stem-cell research. Bush has sucked Big Pharma's penis long and hard while dismantling the FDA.

Africa Policy: Yeah, but it had to pass muster with right-wing religious fanatics and in many respects is a bad joke.

Well, if we're stooping to oral sex imagery I guess I'm out.

The respectful discussion was nice while it lasted.

For the record: I agree with you on stem cell research. It's a disgrace that it's not federally funded.