Quotes du Jour On the War 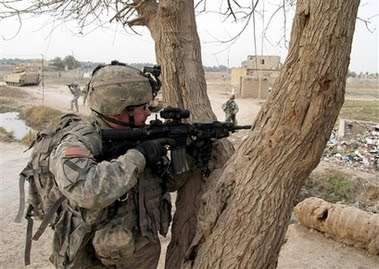 What's more telling is how unpopular the war is in Britain, and how an entire generation of Brits have now grown up thinking of the United States as a bullying, torturing force for instability in the world. That's not the I love -- but it is the image of that Bush and Cheney have built for the largest generation of human beings ever to grow up on the planet. In , the government has fallen because there is no longer support for even a minimal presence in , let alone .

This is the critical question, when you consider the aftershocks of what President Bush has wrought over the last 6 years. On the evidence of the last six years, is the an aggressive, destabilizing force on the global stage or a benign, ordering force?

Who can give an answer to that question that they're proud of?

[British PM Tony] Blair is essentially doing what Ronald Reagan did after 250 soldiers were blown up in their barracks in : he’s simply declaring victory and getting out. (Although not even Blair’s spin this week sounds much like victory: “What all of this means is not that is how we want it to be. But it does mean that the next chapter in ’s history can be written by Iraqis.”)

Under [Army General David] Petraeus’s plan, a military force of 160,000 or more is setting up hundreds of “mini-forts” all over and the rest of the country, right in the middle of the action. The U.S. Army has also stopped pretending that Iraqis—who have failed to build a credible government, military or police force on their own—are in the lead when it comes to kicking down doors and keeping the peace. And that means the future of depends on the long-term presence of forces in a way it did not just a few months ago.

Adding 20,000 troops to in a five- to six-month window is a significant increase but in and of itself not decisive, and certainly not a "new strategy."

The relentless, focused targeting of Shia and Sunni extremist organizations is a far more important feature of what Iraqis are calling "the new security plan" than more troops. The coalition's effort to better integrate the economic and political development "lines of operation" with security operations could have greater long-term effects. . . . Perhaps the most encouraging aspect of the new security plan is the increased aggressiveness of the Iraqi Army as it conducts counterinsurgent operations. The Iraqi military defeat of the cultist "Soldiers of Heaven" planned attack on Najaf in late January provides a dramatic example. With coalition backup, Iraqi forces launched a spoiling attack and killed or captured several hundred militants.

Slowly bleeding our forces by defunding what our commanders think they need to win (the House approach) or rewording the authorization of the use of force so that lawyers decide what operations are to be launched (the Senate approach) is no way to fight a war. It is no way to end a war. It is a way to complicate the war and make it inherently unwinnable -- and to shirk the political responsibility for doing so.

It’s the same old story. Fear of being attacked with charges that make no sense whatsoever keeps the Democrats from withholding funding, an action that a majority of the country supports. An alternate action that Republicans have no good way to oppose or argue against is dropped due to internal discord. Between the paralysis caused by fear, and the inability to achieve consensus on the things that don’t attract paralysis, nothing ever gets done. Hopes are raised. Hopes are dashed. Hopes are raised again. And so it goes.

Whoever saddled them with that donkey really knew what they were doing.