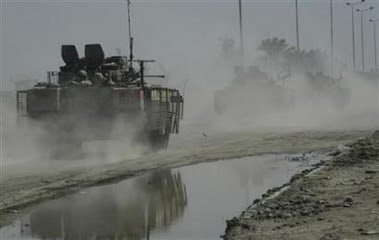 A British Army convoy patrols a road in Basra today
The announced pullout of more British troops from – in reality the endgame for the ’s most steadfast Coalition partner -- can be viewed as a dress rehearsal of a sort for the eventual withdrawal of forces.

I say "of a sort" because the city of and the oil-rich southeastern part of have been relatively tranquil compared to in the center of the country and in the west.

Under the phased withdrawal plan, British troops would leave the city center for a command post at the airport where they still can keep an eye on the border with and the Iraqi troops and security forces that they have trained. One reason for this decision is that they have come under increased attacks involving roadside bombs.

British PM Tony Blair is peddling the line that it's "mission accomplished," and a White House desperate for good news has enthusiastically endorsed that assessment.

But this outbreak of feel good-ism masks a couple of realities:

First, Blair's popularity and that of the Labor Party, like President Bush and the Republican Party, has tanked and the long moribund Tories and Democrats are ascendant.

The biggest reason for these reversals of fortune is that a war that Bush started but has been unable to finish has been backed to the hilt by Blair and is now widely viewed as an unmitigated disaster. (Some 132 Brits have died in the conflict, a far cry from the 3,148 Americans, but substantially more any of the 18 other Coalition nations, who have suffered a total of 124 deaths.)

In short, Blair is desperate to save his legacy. It is not unfair to say that Bush has squandered his.

Although Dannatt was chided for his candor, he was spot-on correct and the same grisly conundrum holds true for American forces.

The biggest concern about the drawdown is that it's not at all clear that Basra is capable of running its own affairs without armed British nannies. Additionally, there has been a pattern of attacks by insurgents not long after the British (and Australians) have handed over responsibility for a particular post or area to Iraqi forces.

What is going to keep this pattern from continuing and even growing? Nothing.

The one bit of good news is that British forces will now be able to concentrate more on operations in , where the Taliban and Al Qaeda are re-emergent in part because of the drain of troops and resources because of the war.

But in the end the British withdrawal will be the first major test of whether the Iraqis are capable of being masters of their own destiny, which begs the question of whether Blair’s "mission accomplished" line may be as pyrrhic as Bush’s.

Posted by Shaun Mullen at 11:26 AM
Email ThisBlogThis!Share to TwitterShare to FacebookShare to Pinterest