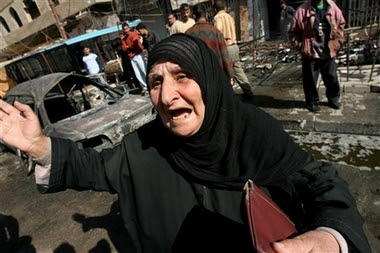 The new National Intelligence Estimate on starkly delineates the gulf that separates President Bush's illusions from the realities of the war. Victory, as the president sees it, requires a stable liberal democracy in that is pro-American. The NIE describes a war that has no chance of producing that result. In this critical respect, the NIE, the consensus judgment of all the intelligence agencies, is a declaration of defeat.

Its gloomy implications -- hedged, as intelligence agencies prefer, in rubbery language that cannot soften its impact -- put the intelligence community and the American public on the same page. The public awakened to the reality of failure in last year and turned the Republicans out of control of Congress to wake it up. But a majority of its members are still asleep, or only half-awake to their new writ to end the war soon.

Perhaps this is not surprising. Americans do not warm to defeat or failure, and our politicians are famously reluctant to admit their own responsibility for anything resembling those un-American outcomes. So they beat around the bush, wringing hands and debating "nonbinding resolutions" that oppose the president's plan to increase the number of troops in .

For the moment, the collision of the public's clarity of mind, the president's relentless pursuit of defeat and Congress's anxiety has paralyzed us. We may be doomed to two more years of chasing the mirage of democracy in and possibly widening the war to . But this is not inevitable. A Congress, or a president, prepared to quit the game of "who gets the blame" could begin to alter American strategy in ways that will vastly improve the prospects of a more stable .

has sacrificed more than 3,000 men and women, and $500 billion, to fight a war in that we have never fully understood. For nearly a year, senior administration officials refused to use the phrases "insurgency" or "guerilla war," only changing their rhetoric when their top general in the contradicted them publicly. Today, it is clear that has mutated into something more than just an insurgency or civil war, and it will take much more than cherry-picking counterinsurgency's "best practices" to win. [Defense] Secretary Gates appears to be both intellectually honest and curious enough to find the right words to describe this war—these wars. Finding and executing the right strategies to fight them will be much tougher.