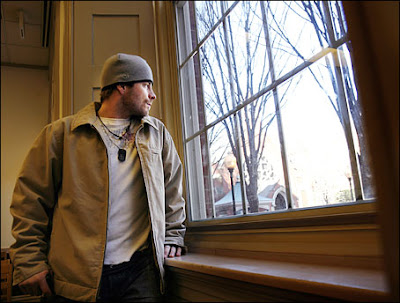 Jeremy Duncan at Walter Reed: From one hell hole to another
The Washington Post had a blockbuster of a story yesterday about the travesty that the once proud has become because of the .

The former crown jewel of military medicine has been transformed into a holding ground for physically and psychologically damaged outpatients, says the Post, and most of them still need treatment or await bureaucratic decisions before being discharged or returned to active duty.

I have used up my anger quotient for the time being, so I turn to Deb at Deb’s Web, who like me is a veteran, for some major venting:

"How can this situation be tolerated? Why are our recovering soldiers living in conditions that rival the ghetto? In a third world country. I am deeply ashamed that we have failed those who did as they were ordered, giving life and limb for their country, only to be treated as annoyances and inconveniences upon their return. The Paris Hilton method of loyalty. Once broken, no longer needed.

"I love this country, but lately have become concerned about our lack of human decency, of our inability to empathize with others, our bizarre belief that those who are not 'perfect' deserve to suffer. For the last week, this country and its media have been riveted by the story of one dead woman. As tragic as that may be for her family and friends, many others have suffered the same fate since then and have not been accorded one iota of attention. Many other families have been irrevocably altered by the events in and barely get a mention on their local news. Meanwhile, CNN and ABC want us to know that Britney's drapes now match the carpet. What's up with that?

"Supporting the troops means more than a bumper sticker on your car. It means that you bug your Representatives, your Senators and your Governors until the troops get competent help. Perhaps the obstructionist Republicans will finally hear the people who elected them and start working with other members of Congress to do something constructive, instead of posturing and pandering about a war that is not supported by their constituents."