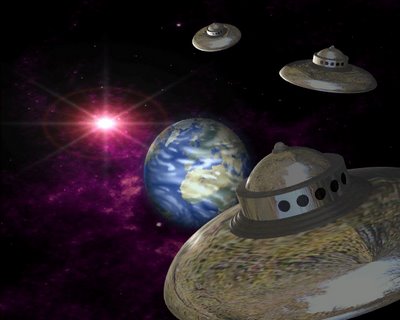 UFOs and space alien visitors are a central part of our culture, yet after all the years that they've been observed (or not) these phenomena (or not) remain a riddle inside a mystery wrapped in an enigma.

Space.com asks why this is so?

For one, the field is fraught with hucksterism. It's also replete with blurry photos and awful video. But then there are also well-intentioned and puzzled witnesses.

Scientifically speaking, are UFOs worth keeping an eye on?

There have been advances in the field of UFO research, according to Ted Roe, Executive Director of the National Aviation Reporting Center on Anomalous Phenomena (NARCAP), based in Vallejo, California.

Roe said that the capture of optical spectra from mobile, unpredictable luminosities is one of those innovations and there already have been some good results.

NARCAP was established in 2000 and is dedicated to the advancement of aviation safety issues as they apply to, what they term Unidentified Aerial Phenomena (UAP).

Roe said that a decade from now, researchers should have even better instrumentation at their disposal and better data on UAP of several varieties. His forecast is that scientific rigor will prevail, demonstrating that there are:

NARCAP has made the case that some of these phenomena have unusual electromagnetic properties. Therefore, they could disrupt microprocessors and adversely effect avionic systems, and that for those reasons and others UAP should be considered a hazard to safe aviation.

It is likely that either conclusion will fly in the face of the general assertion that UAP are not real and that there are no undocumented phenomena in our atmosphere. That should open the door to the realization that there's no good reason to discard outright the possibility that extraterrestrial visitation has occurred and may be occurring.

Then there is UFO debunker Robert Sheaffer, who notes thathe refutes whatever nonsense:

Stands in the greatest need of refuting, no matter from what source it may come, no matter how privileged, esteemed, or sacrosanct . . . sacred cows, after all, make the best hamburger.

UFO believers are convinced that the existence of UFOs will be revealed 'any day now'. But it's like Charlie Brown and the football: No matter how many times Lucy pulls the football away or the promised 'disclosure' fails to happen -- they're dead-certain that the next time will be their moment of glory.

Somewhere in between Roe and Sheaffer is Kevin Randle, a leader expert on UFOs, who says:

I would have to say that we're stuck in neutral. There's no real new research, he said, and that's because we have to revisit the trash of the past.

Randle points to yesteryear stories, one stretching back in time to a supposed 1897 airship crash in Aurora, Texas, long proven to be a hoax by two con men -- yet continues to surface in UFO circles.

Then there's the celebrated Thomas Mantell saga, a pilot that lost his life chasing a UFO in 1948. There are those that contend he was killed by a blue beam from a UFO, Randle said, even though it has been known for years that the UFO was a balloon and he violated regulations by climbing above 14,000 feet without oxygen equipment.
Posted by Shaun Mullen at 4:02 AM
Email ThisBlogThis!Share to TwitterShare to FacebookShare to Pinterest