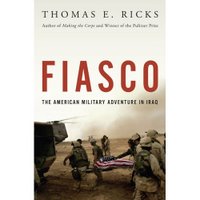 Do we need another book on the epic disaster that is the war in Iraq? Absolutely when the author is Thomas Ricks.

Ricks is the Washington Post's senior Pentagon correspondent and his "Fiasco: The American Military Adventure in Iraq" promises to be the definitive story of the war because of his access to senior military officials at the heart of war planning.

Here's part of an advance notice:

The American military is a tightly sealed community, and few outsiders have reason to know that a great many senior officers view the Iraq war with incredulity and dismay. But many officers have shared their anger with renowned military reporter Thomas E. Ricks, and in Fiasco, Ricks combines these astonishing on-the-record military accounts with his own extraordinary on-the-ground reportage to create a spellbinding account of an epic disaster.

As many in the military publicly acknowledge here for the first time, the guerrilla insurgency that exploded several months after Saddam's fall was not foreordained. In fact, to a shocking degree, it was created by the folly of the war's architects. But the officers who did raise their voices against the miscalculations, shortsightedness, and general failure of the war effort were generally crushed, their careers often ended. A willful blindness gripped political and military leaders, and dissent was not tolerated.

Update: Here's a link to The New York Times' review of "Fiasco," which was posted on Tuesday.
Posted by Shaun Mullen at 3:23 AM
Email ThisBlogThis!Share to TwitterShare to FacebookShare to Pinterest