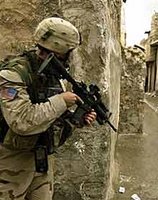 There's an old saying that a conservative is a liberal who got mugged. So what is a neoconservative who has come to see Iraq as a war without end? A realist.

You can put Lawrence Kaplan in that camp.

Kaplan is senior editor at The New Republic and has written for a number of conservative publications. He was executive editor at William Kristol's The National Interest before moving to TNR.

This is the part of the movie where I note that like Kaplan, I supported the invasion of Iraq in principle, buying into the notion that Saddam Hussein was a very bad man who had very bad weapons and was a very bad threat. Unlike Kaplan, I forsaw the post-invasion occupation as the U.S.'s undoing and accurately predicted that it would founder because the Bush administration had spent 59 minutes on the war and barely a minute on what came next.

But that's all water down the Euphrates now.

Kaplan is just back from Iraq (with a stopover in Kuwait) and the fine reportage and eloquent writing in his New Republic dispatch cannot mask his despair over the bloody hell that the four-year-old occupation has devolved into.

Kaplan still clings to the slim thread that the war can be somehow "won" through attrition, but at heart he is a chastened man.


A conventional wisdom has emerged in Washington, arguing that U.S. forces have been "hunkering down" - the title of a recent article in the Atlantic Monthly - and patrolling less. Indeed, the president himself has pledged "less U.S. patrols, less U.S. presence." But this does not make it true. After the February bombing of the Shia mosque in Samarra, the number of U.S. patrols quadrupled in Baghdad. On a recent week, the Army sent 1,100 of them into the capital. It did so for a simple reason: Letting go has become the whole point of American policy, but officers know that, every time they let go of a sector, it comes apart at the seams.

The anatomy of this universe, as much as anything that happens in it, points to an essential truth about the Iraq war: It has a momentum of its own. This much becomes clear even in Kuwait, where, at a desert air base, hundreds of soldiers line up in front of signs announcing flights to Speicher, Q-West, and other bases in Iraq. It is after midnight, but, from the other side of the base, the golden arches of McDonald's still glow in the sky. "When it gets built up like this, it's the surest sign you're going to lose," a contractor who served in Vietnam tells me, alluding to the wasted years that must elapse before this sort of infrastructure can come into being.

The Army may have created its own universe in Iraq, but the outside world does intrude. The one arena where Washington does so regularly is the numbers game. In fairness, the Bush administration has only bad options: It can either maintain force levels in Iraq and face political ruination at home, or it can bring the troops home and watch Iraq burn. Most officers have resigned themselves to drawdowns proceeding without condition and regardless of consequence. "No one's going to 'pull' brigades out of Iraq," says one field grade officer. "It'll be over when they leave but don't get replaced." In the Pentagon's desire to hold up the deployment of additional brigades, he says, one may glimpse the future of the country the Army now calls home. There is none.