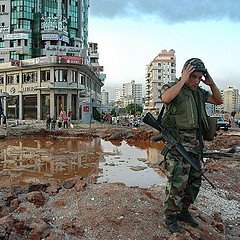 There is a very good reason why I have been posting under a "War on Terror" heading on the escalating conflict between Israel and terrorist groups. While Israeli has been in one state of conflict or another with Palestinians since its creation in 1948, the parameters of the latest chapter are too broad to pigeonhole as being just another shoot 'em up between the two.

Face it, this is a conflict pitting the forces of violence against the forces of moderation in a region that has changed markedly since the last open hostilities between Israel and militant Palestinian groups.

Iran, with its nascent nuclear program and active support of terrorists in Iraq and Lebanon, as well as Gaza, is now the top dog.

Syria is a weakened but still meddlesome force.

Iraq is a bloody mess. Its hapless national unity government is incapable of stopping a slow-motion civil war, while the presence of 130,000 U.S. troops is a destabilizing influence.

I believe that Israel has overreacted, notably in Lebanon, which is being held hostage by Hezbollah (and by extention its Syrian and Irani patrons). But the key part of overreacted is reacted.

The serial kidnappings of Israeli civilians and soldiers and attacks with (Iraqi-made?) rockets on its soil were intolerable, and the terrorists responsible for that mischief have no one but themselves to blame for the big hurt that the Israeli military is putting on Gaza and Lebanon.

Meanwhile, no people in the region is more pathetic than the Palestinians.

The sliver of hope that came with independence and the shaky detente with the Sharon government has been crushed by Hamas. Its militant wing -- and not Israel or the boycotting U.S. and European Union -- is responsible for starving the very people who brought it to power.

Perhaps no aspect of the conflict is more troubling than the fact that moderate voices -- primarily Egypt and Jordan -- are being drowned out by the sounds of exploding bombs and gunfire.

The upper hand is now held by terrorists who want nothing more than to undermine the baby steps being taken toward democracy in the region and replace that with their own fanatical vision of Islam.

In one respect, the biggest loser is the Bush administration, which hautily assumed that it could jury rig a new government in Iraq that would become the lynchpin for democracy in the Middle East. Well, the joke's on the neocons who thought that all it would take was a little chewing gum and bailing twine.

Thomas Friedman of The New York Times makes the argument (in a paid subscription only) op-ed column that it's no accident the current violence is occurring in the three Arab countries with democracies -- Lebanon, the Palestinian territories and Iraq. I think that assessment is much too simplistic.

Nor do I believe that the situation, as dire as it is, will escalate into a truly regional conflict.

That is largely up to two nations -- Israeli, which would like nothing more than to crush Hezbollah but will make its point and draw back, and grand puppetmaster Iran, which through its proxies presumably already has made its point.

Cease fires will be negotiated. Agreements will be reached. Prisoners will be exchanged. But the setback that this violent interlude represents will not be soon undone.

And all the while the threat that is Iran and the disaster that is Iraq loom large.