The Civil War in Iraq & My Summer Vacation 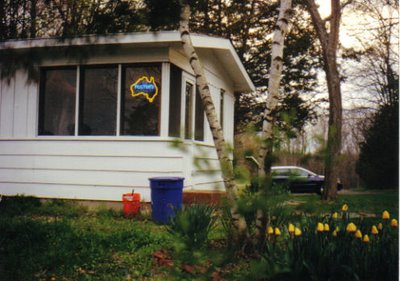 On Sunday, the Dear Friend & Conscience and I headed up to the Kiko's House mountain hideway. We unpacked and then met a friend whom we drove out to the 280-year-old homestead where our late friend, Jean, lived until her untimely death in a car crash. We showed the friend around the grounds and peeked into the windows of the house before driving over the mountain for Jean's memorial service, which was held in an amphitheater at an exclusive prep school. Geese floated serenely on a lake behind the ampitheater stage as the DF&C and others spoke about Jean's rich life of giving and accomplishment. That evening, we stopped by a restaurant for sushi and drinks.

In Iraq on Sunday, at least 49 people were killed or found dead in sectarian violence. The deaths came one day after a suicide car bomber killed at least 53 people and wounded more than 100 in the Shiite holy city of Kufa and 60 gunmen stormed a meeting of the country’s top sports officials in Baghdad and abducted 30 people, including guards and the president of Iraq’s National Olympic Committee. Six of the hostages were freed the next day.

* * * * *
On Monday, the temperature hit 95 degrees Fahrenheit, unusually high for the mountains, and it was extremely humid. I cooked up a big skillet of Carribean black beans early in the morning to avoid having to stand over the stove in the heat. I pulled out my laptop and put the finishing touches on a consulting job. The DF&C and I spent the afternoon cooling off in a mountain spring-fed pool before returning to the cottage, where I rolled the bean mix into flour tortillas and added a salsa-guacamole garnish.

In Iraq on Monday, the throats of a mother and her three children were slit in the city of Basra. Five other family members were rescued before they bled to death. The family had fled Baghdad for the southern city after receiving threats because they cooperated with U.S. forces. Officials spoke anonymously because of their own fear of reprisals by sectarian militias that have infiltrated Basra's police. At least 30 other people were killed throughout the country, including an Iraqi who died when two rockets struck the heavily fortified Green Zone in Baghdad. One Salvadoran soldier died and another was wounded in a bombing near Kut, southwest of Baghdad. Sixteen bodies - apparent victims of sectarian death squads - were found in widely separate parts of the country.

* * * * *
The heat and humidity continued on Tuesday. The DF&C and I ran into town to express mail the consulting job before heading back to the pool. That evening, as we finished a dinner of stuffed ravioli in a pesto sauce complimented by a salad of fresh greens and herbs and a bottle of an Orvieto pinot grigio, the emergency weather radio chirped to life and "Sven," as we jokingly call the Weather Service's disembodied Swedish sounding automated voice, warned us of an approaching thunderstorm with high winds. Sure enough, the trees around the cottage soon started to sway and the lights flickered and then went out as bands of thunder and lightning and torrential rain swept through.

In Iraq on Tuesday, at least 48 people were killed in an attack on a market in Mahmudiyah near the site of the rape-murder of an Iraqi girl and her family at the hands of U.S. troops in March. The United Nations -- citing statistics provided by the Ministry of Health and the central morgue in Baghdad -- reported that news media reports about violent civilian deaths understate the true carnage. The report estimated that 100 Iraqis a day died in June, a number that does not include insurgents and security forces. If extrapolated to the much-larger population of the U.S., the violent civilian deaths would approach 1,000 a day, or 30,000 dead in June alone.

* * * * *
The heat and humidity broke and the power came back on shortly after dawn on Wednesday. Mist enveloped the cottage, obscuring the ridgeline across the valley, and did not burn off until midday. I cleaned up the branches and leaves that had blown down in the storm and combed the beggar's lice from the coat of one of the kitties after a ramble in the woods. The DF&C picked wild black raspberries. We talked about what color to paint the storage shed before eating the last of the black bean tortillas and the berries for dinner. We then lit citronella candles and sat out in the yard watching the lightning bugs do their midsummer ballet in the meadow and listening to the bullfrogs down at the pond. Five white-tailed deer -- a doe with twin fawns and another doe with a single fawn -- grazed in the meadow, unperturbed by the sound of our familiar voices.

In Iraq on Wednesday, the power stayed off in much of Baghdad. A gun battle broke out at a hospital between police officers guarding a terrorist patient and insurgents who were trying to free him. Commandos from the same unit as the police officers stormed the hospital and joined in the melee, firing on their own comrades. The Defense Department announced that five Army infantrymen had been killed, bringing to 2,556 the number U.S. troops who have died since the beginning of the war. They included Corporal Nathaniel S. Baughman, 23, of Monticello, Indiana (vehicle hit by grenades in Bayji); Staff Sergeant Michael A. Dickinson II, 26, of Battle Creek, Michigan (hit by small arms fire in Ramadi); Corporal Kenneth I. Pugh, 39, of Houston (hit by small arms fire in Baghdad); Sergeant 1st Class Scott R. Smith, 34, of Punxsutawney, Pennsylvania (hit by an explosive in Iskandariyah); and Specialist Manuel J. Holguin, 21, of Woodlake, California (hit by small arms fire in Baghdad).

Thursday was a travel day, but before leaving the mountains the DF&C and I stopped by the pool for a last swim. I finished reading Kevin Phillips' "American Theocracy" before we loaded the car and headed back to the big city, where we attended an orientation session for a program that the DF&C will be involved in at the university. Kiko's House was as we left it, welcoming and comfortably cool, although the zebra plant looked a little wan and needed watering and the Japanese beetles had taken a few more bites out of the leaves of the plum tree in the front yard.

In Iraq on Thursday, police recovered 38 more bodies in Baghdad. All showed signs of torture. At least three people were killed and 10 others wounded when a car bomb exploded near the Technology University. Another 19 violent deaths were reported in Baghdad and Kirkuk, including a senior Interior Ministry employee and a family of four who were gunned down as they shopped at a grocery store, a woman who was killed when a grenade hit her house in the predominantly Sunni district of Ghazaliya in western Baghdad, and two people who died when a car bomb exploded beside an Iraqi police patrol in the northern city of Kirkuk, wounding eight, including five policemen. Meanwhile, 24 of the 30 National Olympic Committee kidnap victims were still missing.

Posted by Shaun Mullen at 10:11 AM
Email ThisBlogThis!Share to TwitterShare to FacebookShare to Pinterest

Shaun - Alternating your diurnal activities with the deaths of Iraqis caught in the civil war there indicates the actual stress and urgency the mounting mess in the Middle East should be generating in all our lives.

Exactly, although I'm not so sure that the stress that I and the DF&C feel is shared by all that many people. There is a real War & Suffering Fatigue Syndrome at work regarding Iraq and the Middle East, as well.

The tipping point that many of us looked toward in Iraq already has occurred. The country tipped not for the better but for the worse and I am unable to see any way out of the ever deepening cycle of violence and recriminations. The Iraqi people are f*cked if the U.S. withdraws. They are f*cked in the U.S. stays.

Simply blaming Bush and his neocon cabal is no longer enough.

I'm diving deep into that spring-fed pool that I wrote about and feeling that delightful chill permeate my body but I can't stop thinking about the Iraqi people. As an American, I feel so responsible for their plight (understanding that some of their wounds are self inflicted). And so helpless.