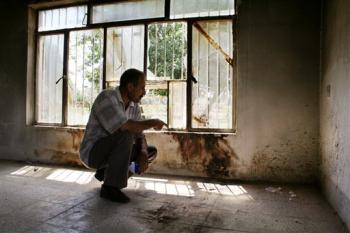 A neighbor points to blood and burn marks from the rape-murder.
Kiko's House got an extraordinary number of hits yesterday because of my exposition on the Mahmudiyah rape-murders. I suppose I should feel good -- the more blog traffic the better, and all that -- but I'm not celebrating.

Nothing is going to bring back the young woman who was stalked and raped and she and her family murdered and burned by Steven Green and his fellow sadists from the 1st Battalion, 502nd Infantry Regiment.

The shame that I feel cannot be wished away any more than George Bush can wash away the blood of the thousands of Americans and Iraqis from his hands.

In any event, the story is fading fast from that notoriously short American attention span. So many outrages, so little time. Let's go to the beach. Yada, yada, yada.

But there have been several developments:

* As if on cue, the Mujahedeen Al-Shura Council, an Al Qaeda affiliated group, posted a video on the Internet showing horribly mutilated bodies believed to be those of Kristian Menchaca and Thomas Tucker, two 502nd Infantry Regiment soldiers from the same platoon as Steven Green.

The group says that the men were kidnapped on June 16 to avenge the March 12 rape-murders of Abir Al-Janabi and the murders of she and her father, mother and sister.


The bodies were videotaped on a bridge over a river. Both are drenched in blood. The head of one of trooper is held high by an armed man, like a trophy, while the head of the other is being stamped on by another armed man. One man appears to also have been shot and the other possibly hit with an explosive.

The Jawa Report has posted stills from the video and the video itself here. Warning: They are extremely graphic.

* The Army identified the five troopers charged in connection with the incident in addition to Green, who was given an honorable discharge in May and sent home after being diagnosed with a personality disorder. Green was charged last week.

The other men are Sergeant Paul E. Cortez, Specialist James P. Barker and Privates First Class Jesse V. Spielman and Bryan L. Howard. Also charged is Sergeant Anthony W. Yribe. (I've detailed the charges against them at the end of this post.)

A platoon consists of anywhere from 16 to 44 soldiers. It is led by a lieutenant with an NCO as second in command, and consists of two to four squads, so we're talking a small -- if not tight-knit -- group here.

So, Green, his five co-defendants and the two retaliation victims made up anywhere from half to 20 percent of their platoon, depending upon its size and rotations in and out of the unit.

Cortez and Yribe are NCOs, not wet-behind-the-ears upstarts like Green. And, according to the charges, Cortez, Barker and Spielman seemed to have a pretty good buzz on when they entered the Al-Janabi house.

* Abir's birthdate was August 19, 1991, according to a document released by Iraqi authorities. U.S. officials had said that the rape victim was 20 and other reports placed her age as high as 25.

The implication, of course, is that an older female would be a less sympathetic victim than a teenager and could be more easily spun as a consulting adult and not jail bait.

* The Iraq government will ask the United Nations to end immunity from local law for U.S. troops. Human Rights Minister Wigdan Michael a lack of enforcement of U.S. military law in the past had encouraged soldiers to commit crimes against Iraqi civilians.

The initiative is DOA. Pigs will fly before the U.S. will allow its soldiers to be thrown into the maw of the Iraqi criminal justice system.

Did you see her and want her so bad, that young, forbidden fruit? Did she once smile nervously at the checkpoint, and you thought it was just for you? Did you come on strong the next time around, flash a little money maybe, or lay a syrupy line on her that you got from a phrasebook? What did she do -- recoil? Look away? Look disgusted? Look blank? What did she do to bring on the big hurt from a big, tough man like you?

So you planned it all out. You cased the house, you reconnoitred. You got your buddies in on it -- or were they in from the start, did they make a play too, were they too turned away by this haughty Arab bitch, this piece of trash from a shitheap town in a shitheap country filled with nothing but lazy, lying, murdering towelheads? Somebody like that thinks they're too good to give it up to you? You liberated her goddamned country, for Christ's sake, and now she won't even put out? That dog won't hunt. Hell no. You and your pals had to teach her a lesson. You had the power, you had the guns, you were Americans; who was going to stop you?

Sergeant Anthony W. Yribe: Dereliction of duty and false statement for failure to report the rape-murders.


* * * * *
There has been confusion over the unit to which the 502nd Infantry Regiment reports.

It is part of the 101st Airborne Division, but has been temporarily reassigned to the 4th Infantry Division, which is operating in the so-called Sunni Triangle south of Baghdad where the rape-murders and retaliation killings took place.


GO FIGURE: RECRUITING GOALS MET OR EXCEEDED
Neither the torrent of bad news out of Iraq nor the wishful thinking of what passes for an antiwar movement affected U.S. Army recruiting goals last month.

The Pentagon says that the Army's goals were surpassed in June, the 13th consecutive month the service has met or exceeded its target.

The Navy, Air Force and Marine Corps also met or exceeded their goals.

The active-duty Army, which offers a wide variety of financial incentives for potential recruits, found 8,756 recruits in June, compared with its target of 8,600.
Posted by Shaun Mullen at 4:45 AM
Email ThisBlogThis!Share to TwitterShare to FacebookShare to Pinterest

The Pentagon says that the Army's goals were surpassed in June, the 13th consecutive month the service has met or exceeded its target.The Navy, Air Force and Marine Corps also met or exceeded their goals.

This very subject came up on a thread on another blog; someone asserted that the army is falling short of their goal. Could you provide a link? Thanks.

The comment/thread in question is here. I'd cite your post in a response, but it's a blog on which other commenters routinely expect links to source documents to back up these kinds of statements. The numbers in your post make it plain you're quoting something. Would you be kind enough to provide that link?