Iraq I: Another Myth Shot to Hell 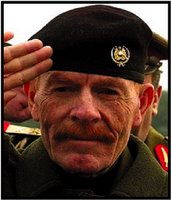 The conventional wisdom is that religious extremists are behind the insurgent-led sectarian violence in . But the Iraqi government's new list of the 41 most wanted fugitives suggests that ex-Baath Party officials and former members of Saddam Hussein's regime are the backbone of the insurgency.

The list includes at least 21 former regime figures, among them Saddam's chief lieutenant, his wife, eldest daughter, two nephews and a cousin — allegedly financiers of the insurgency. Only five of the 41 names are clearly identified as members of Al Qaeda.

That reinforces the impression shared by analysts that ex-Baath party members and former regime figures still play a key role in the insurgency.Diaa Rashwan, an Egyptian expert on militant groups, told The Associated Press that there was no doubt that veterans of Saddam's intelligence and security network form an important part of the Iraqi resistance at the command level.

officials also have said that the percentage of insurgents belonging to Al Qaeda was relatively small, although the organization has drawn more attention because of its worldwide image and its tactic of spectacular suicide attacks against civilians.

First on the new list was Izzat Ibrahim al-Douri, Saddam's top lieutenant (see photo). Saddam's wife, Sajida Khairallah Tulfah, was No. 17, just behind his eldest daughter, Raghad. Sajida is believed to be in , while Raghad lives in , where she was given refuge by King Abdullah II.
Posted by Shaun Mullen at 3:59 AM
Email ThisBlogThis!Share to TwitterShare to FacebookShare to Pinterest