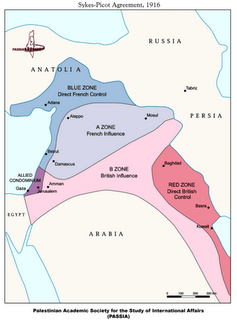 As I noted in passing yesterday, it may be time to think the unthinkable in Iraq, and that means deciding whether centuries old sectarian animosities are so great that there never can be an effective government of national unity.

Iraq's borders are substantially a result of a secret partition (see map) between the British and French in 1916 that had nothing to do with historic or sectarian considerations and everything to do with staking out spheres of post-World War I influence. The partition is recognized as a turning point in relations between the West and Arab peoples, which is to say that it has pretty much been all downhill since.

Fast forward 90 years: The Bush administration cannot rescue Iraq from itself, let alone put it back together again, and U.S. policy is only making matters worse. Large swaths of the country are convulsed by a civil war that is now taking 100 lives a day. Only Kurdistan is functional and that is because it is effectively independent from the rest of Iraq.

Peter W. Galbraith, a former United States ambassador to Croatia, writing in The New York Times, proposes allowing predominately Sunni areas in the center of Iraq and Shiite areas in the south to coalesce into regions much like the Kurdish zone in the north.

Galbraith himself notes that the biggest problem with this solution is that it would give carte blanche to Al Qaeda and other terrorist groups to create bases where they could plan attacks against the West.

His solution would be to place a small U.S. force in Kurdistan, which presumably would welcome the military presence because it would help protect Kurds from Arab Iraqis and ease tensions between Kurdish Iraqis and Turkey.

From Kurdistan, the American military could readily move back into any Sunni Arab area where Al Qaeda or its allies established a presence. The Kurdish peshmerga, Iraq’s only reliable indigenous military force, would gladly assist their American allies with intelligence and in combat. And by shifting troops to what is still nominally Iraqi territory, the Bush administration would be able to claim it had not “cut and run” and would also avoid the political complications — in United States and in Iraq — that would arise if it were to withdraw totally and then have to send American troops back into Iraq.

Yes, it's bold and it's messy. But it's a start on a way out.
Posted by Shaun Mullen at 5:59 AM
Email ThisBlogThis!Share to TwitterShare to FacebookShare to Pinterest