War in Iraq I: "Progress" Redefined 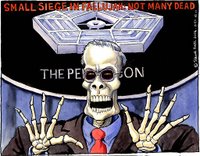 U.S. troop levels in the capitol were increased from 40,000 to 55,000 last month in conjunction with a highly publicized security sweep that appears to not only have had no effect but has seen the level of violence increase by the week.

General George W. Casey Jr.'s remarks came on a day when at least 30 people were killed and 37 wounded in and around Baghdad, including 20 people who were kidnapped from a bus station 60 miles north of the city and killed.


Meanwhile, Prime Minister Nuri Kamal Al-Malaki, himself the target of several assassination attempts, urged lawmarkers to approve his program of national reconciliation because it is Iraq's "last chance" to avoid slipping into chaos.

THERE IS SOME GOOD NEWS

British and Australian forces have handed over responsibility for security to Iraqi forces in relatively peaceful Muthanna in southern Iraq, the first such transfer in an entire province.

Al-Maliki hailed the transfer as an important step toward the goal of full Iraqi responsibility for all 18 provinces by the end of next year.