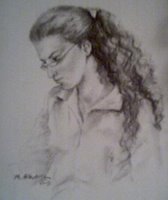 Some of the most honest and certainly the most visceral information coming out of Iraq is from its bloggers. I read perhaps 50 Iraqi blogs over the weekend from the safe and comfy confines of Kiko's House, where I listened to the webcasts from my favorite jazz stations (*), was serenaded by songbirds and surrounded by lovely trees and plantings -- all in stark contrast to the conditions in which most Iraqi bloggers live and toil.

The prevailing feeling from the blogs was a mixture of optimism, sadness and pain, but never self pity.

I kept coming back to a post by Attawie, with whom I have some things in common despite our many differences: We're both Pisces, both artists and both use the same Blogger template for our blogs.

An Iraqi simple girl with complicated thoughts, still on the first step of the road. I guess there's much for me to learn.

That's a self portrait of Attawie. Here are some of her recent thoughts:

It has been so long since I published something in my blog. The news about Iraq is always frustrating; false promises and fake solutions to be. Zarqaui's video and Zarqaui's murder. Releasing prisoners from Abu Ghareeb and yet there are families waiting for their fathers, sons and brothers. Saddam is in court and it seems like a comedy, with the judge, lawyers and the whole issue is a charade. Men in Black robbing at night and yet we hear stories about bravery how the resistance is controlling the cities at night.

For a week, I felt weak. I couldn't write. I couldn't be optimistic. The only good news I heard was that the UAE is giving visit visas for Iraqis who don't have pre-entrance to the country. However, they will not give me residency. I'm writing this and I don't know what to become of me next week. My residency has expired last month and they gave me a month to find another way to stay or leave the country.

It's shocking when I come to realize that an Iraqi is refused to be given a residency even though the entire world knows that he is literally homeless. I had to leave Jordan after I finished my study because I am an Iraqi and they won't give me a residency or a "worker statement". In addition, I might have to leave UAE because I don't have a residency now even thought my mom does. However, she can't be my sponsor because she is an Arab woman.

. . . The Institute of Art, where I am studying, is having an exhibition. Five of my works are hanging there on the wall waiting for an answer if they would be out of the country or not. Sema Dubai, a national channel in UAE, wanted to make interviews with four female artists under the age of 25 in the institute. They will be broadcasting live. I was chosen to be one of those young artists.

Last night I dreamt when the reporter came to talk to me, I started explaining my works and the colours along with old Baghdad atmosphere that shows in my paintings. Suddenly I started to cry. The reported tried to avoid the subject of Iraq and wanted to move on to the next artist. I started to tell my story and how I'll have to leave the country . . . Another minute and I was given a lot of gifts and painting tools by a Sheikha who happened to be there. and I was welcomed to stay in UAE. And I woke up.

. . . Iraqis are doomed to suffer inside and outside their country. And that's all I have to say and write.

* * * * *
(*) Here are links to three jazz stations par excellence that all have terrific high-defenition webcasts: WBGO-FM in New York, KJAZ-FM in Los Angeles and WRTI-FM in Philadelphia, which broadcasts jazz half the day and classical the other half.
Posted by Shaun Mullen at 2:49 AM
Email ThisBlogThis!Share to TwitterShare to FacebookShare to Pinterest

You want others to link to you, and you don't even provide a link to someone's blog that you quote extensively?

Nuh-uh. You might have been born to blog, but you're missing some basic elements of the form.

Yes, this picture Attawie is painting is only but part of the sorrow and suffering iraqis are going through. I live in the UAE and everyday there is a law issued concerning Iraqis. One day it is ok to let them through the boarder and the other they are not welcomed. You hear different stories and there is no story that is similar to another.
Today they allowed relatives of the first degree as they are called (mothers, fathers, spouses and children) to come into the country. I assume that Attawie will soon be on her way back to the UAE as her temporary visit visa to Jordan should be expiring soon.

Let me tell you a joke that was being told during the past 3 years: A Palestinian was telling an Iraqi that he was so sorry for what has become of the Iraqis also being scattered around the world and their country is occupied, and they are in a similar condition like the Palestinians. The Iraqi tells him no we are in a worse condition. The Palestinian wonders why since they are only recently going through what they have been going through the past 60 years or more. So the Iraqi says: You know where you are going you have at least a road map! While we hardly have anything!

True we don't know where are we heading too. I can only see continuous bloodshed for a long time to come.

Thank you for bearing with me.
Resonance