Iraq I: Now Boarding For The Next Station of Hell 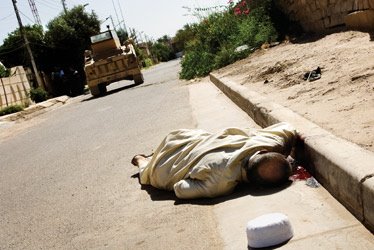 President Bush and Prime Minister Nuri Kamal al-Maliki have signed death warrants for god knows how many Americans and Iraqis with the announcement that more U.S. troops will be sent into the heart of bloody Baghdad to engage in a door-to-door sweep to eradicate violent militias.

I didn't think that an administration that has gotten nothing right could still shock me, but the decision to use what military planners call an "ink blot" strategy at the very heart of the civil war convulsing Iraq did just that.

The strategy, under which troops will use district police stations as local command centers and then go door to door, theoretically stabilizing a neighborhood at a time, smacks of desperation and is so wrong headed that it boggles the mind.

* No amount of troops will be able to pacify the vast stretches of Baghdad controlled by militias. The number of new troops that will join the 30,000 Americans already in the capital was not revealed, but will be in the thousands.

* In the past two weeks, more Iraqi civilians have been killed than have died in Lebanon and Israel. Now the carnage will only grow worse.

* The troops, to be led by military policemen in Stryker armored vehicles, have proven time and again -- from Saigon to Mogadishu to Kosovo to Baghdad -- that they do not have the tactical prowess to engage in close-quarter fighting with an enemy who not only knows the battlefield well but has the support of the locals.

* Some of the very militias being targeted in the sweep are being aided by Iraqi police forces led by the Shiite-dominated Interior Ministry.

* A goal of the strategy is to restore essential services like electricity and refuse collection and built support for the Iraqi government. This did not happen when Baghdad was relatively peaceful; believing that these goals can now be accomplished at point of gun beggars belief.

* The troops will have to be diverted from other hot spots, notably volatile Anbar Province, giving insurgents an opportunity to seize the upper hand, and will draw down the last of the reserves on standby in Kuwait. This may necessitate bringing in another brigade-sized unit from outside the region because the current reserve force, the 24th Marine Expeditionary Unit, was sent to Lebanon last week to help evacuate U.S. citizens

* It will further delay a significant withdrawal of U.S. troops, something that the president is under increasing pressure to do before year's end.

* Piling more violence on violence is not a solution for what ails Baghdad, let alone Iraq, at this late date.

Al-Maliki's visit was in stark contrast with the mood of triumph when the president made a surprise visit to Baghdad on June 13 following the killing of Abu Musab al-Zarqawi, Al Qaeda's leader in Iraq, and coinciding with Operation Forward Together, the failed Baghdad security plan.

The official kiss of death for the new strategy was delivered by Major General William B. Caldwell IV, the senior spokesman for the U.S. military command, who said:

Then there's that lying sack of excrement known as Stephen Hadley, Bush's national security adviser, who said the failure of Operation Forward Together had forced the administration to move to what he called "Phase II."

Phase II, my ass. Hadley's own aides say there is no Phase II and never was.

Six weeks ago, we were talking about pulling American troops back from the city streets, not putting more of them out there.

Operation Forward Together had begun with high expectations but ended in failure as bombings, assassinations and kidnapping -- virtually all of them involving warring Shiite and Sunni militias -- increased dramatically. Some 1,595 Baghdad residents were processed in the city's central morgue in June, most of them victims of the violence, and the death rate has increased dramatically since then.

The primary reason that Operation Forward Together failed was said to be overreliance on Iraqi troops and police, hence the decision to send in even more U.S. troops this time.

Greg Djerejian at The Belgravia Dispatch hits the nail right on the ole' head in his assessment of the new strategy:

Will ink-blotting Baghdad make the difference? I doubt it, frankly. What we see here is a perfect encapsulation of the entire flawed war strategy. Reactive, not proactive, temporarily pulling forces from already volatile regions to ones that have become even more volatile, and therefore failing to conclusively prevail in either--basically too little, too late. Or the Rumsfeld Doctrine, if you will: "just enough troops to lose." I prefer the Powell Doctrine, but call me old-fashioned, and not a courageous new paradigmer.

OUT OF CONTROL
Prior to Bush's announcement, a U.S. trooper emailed Andrew Sullivan at The Daily Dish that Baghdad has descended into anarchy and even Iraqi police are afraid to drive through Shiite or Sunni checkpoints for fear they they will be killed.

This is the dark side of the big shift in the U.S. strategy/presence over the last year. As we've reduced our forces, disengaged from the cities, and consolidated on massive super-FOBs [forward observation bases] like Balad and Camp Victory, we have lost the ability to impose our will on the streets of Iraq. At this point, I don't know how effective U.S. forces can/will be in imposing order. We just don't have the combat power, nor the presence in the city, nor the right mix of constabulary and civil affairs units. It's frustrating.

(Photo by Franco Pagetti for Time magazine)
Posted by Shaun Mullen at 6:01 AM
Email ThisBlogThis!Share to TwitterShare to FacebookShare to Pinterest