Iraq I: We Hate You But Please Don't Leave 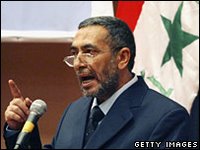 Mahmoud al-Mashhadani, the Sunni Islamist speaker of the Iraqi Parliament, is the poster boy for much of what is wrong with that country's political leadership.

Speaking at a United Nations-sponsored conference in Baghdad over the weekend, Al-Mashhadani said:

We know there was a corrupt regime in Saddam, but a regime should be removed by surgery, not by butchering. The U.S. occupation is butcher’s work under the slogan of democracy and human rights and justice. Leave us to solve our problems. We don’t need an agenda from outside.

But while Al-Mashhadani was all too willing to bite the American hand, like many other Iraqi politicians he stopped short of calling for a withdrawal of U.S. troops, let alone Iraqis taking greater responsibility for the own destiny.

That includes a civil war that threatens to undermine the reconciliation and amnesty program that many people, myself included, see as that nation's best hope before it is given a chance of succeeding.

A SAD TURN OF EVENTS
In yet another sign of the failure to foster national unity, The Telegraph reports that plans are being drawn up to divide Baghdad into Sunni and Shiite halves.

The Tigris River would become the dividing line between the predominately Sunni districts of west Baghdad and the majority Shitte districts in the east.

We have received information of a plan to divide Baghdad. The government is incapable of solving the situation. The situation is terrifying and black.

IRAQ BLOG ROUNDUP
Omar says at Iraq the Model that a radical association of Muslim scholars is being renounced by no less than their former allies in the Islamic Party.

The anonymous by necessity Iraqi reporter at Treasure of Baghdad says hell yes, Iraqi is in the midst of civil war. He also draws painful analogies between Lebanon and Iraq.

Nancy at Welcome to Beth-Nahrain sheds some much needed light on yet another oppressed Iraqi minority -- Assyrian Christians.

Jeff is a Marine stationed in Falluja. He shares some random thoughts at Midnight in Iraq.
Posted by Shaun Mullen at 3:23 AM
Email ThisBlogThis!Share to TwitterShare to FacebookShare to Pinterest